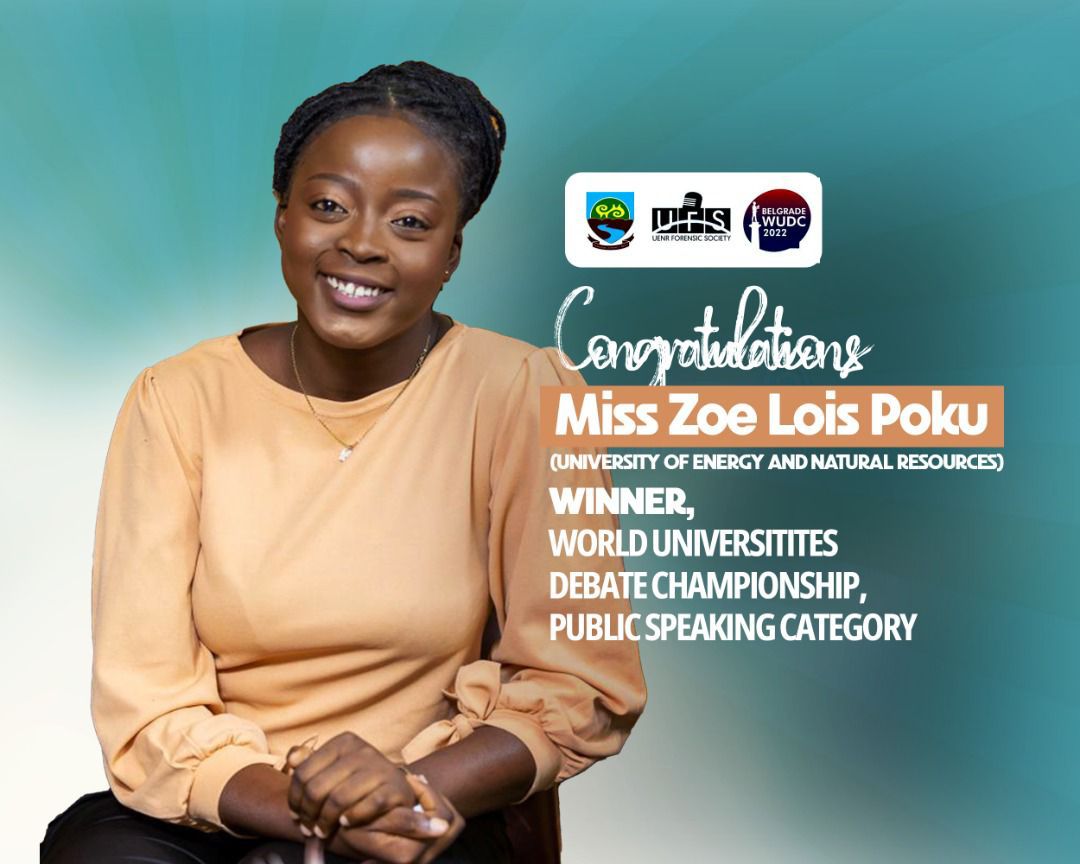 In December last year, we presented to you a milestone in the history of UENR. The UENR Forensic Society (UFS) participated in the Pan African Universities Debate Championship and Zoe Lois Poku won the public speaking category, with the debaters in the persons of Pearl Kwadade and Joel Acquah also qualifying to the Semi Finals. Afia Foriwaa Yeboah was also the only female judge to have qualified to the semifinals in public speaking. It was a heroic moment for UFS as they had sent UENR to the whole of Africa.

We know you’re dying to know who this amazing lady is so let us take you through her journey as a public speaker.

In 2020, however, Zoe wasn’t heard of that much in the debate world. We guess she was powering up cos just look at these achievements!!!!

Okay let’s not get carried away, moving on to the subsequent years.

In July 2021, Zoe again participated in the World Universities Debate Championship in Korea. She qualified to the finals and won the award for the second best public speaker. In December of the same year for the second time, Zoe participated in the Pan African Universities Debate Championship hosted in Botswana.( check previous article for details ) and that is when the “championing” begun . She won PAUDC public speaking making her the best public speaker in Africa.

And then 2022, this current year, she just woke up on the 27th of July 2022 and decided to be a world champion, and that’s on periodt queen! Again, let’s not lose focus here, let’s continue.

This year’s World Universities Debate Championship was her second time and she won and that is how Miss Zoe Lois Poku, in less than a year, became an African and World Champion in debate and public speaking.

That is to say, in the whole world, if you’re searching for the best public speaker, it’s this woman! And to top it off, she’s in the University of Energy and Natural Resources. We’re tears… such a wonderful time to be a “technologian” (more tears)

This is such an inspiring story of perseverance, hard work, dedication and determination. As to how she kept on going up till she got to the top and never came down, unless she comes to tell us her secret! It’s only in UENR and only by Zoe. If you want to argue otherwise, start by showing working!!!!!!

Congratulations Zoe! The world is not ready for you ❤️