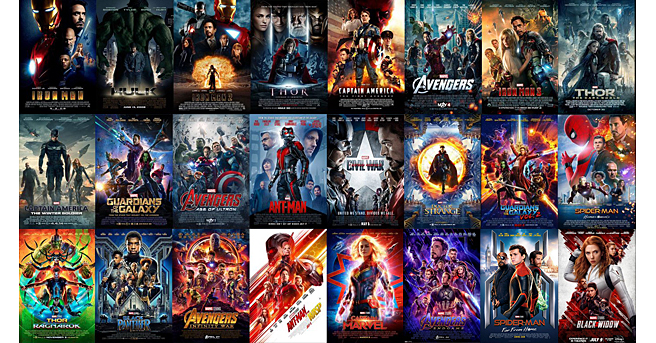 Have ever had that one friend who always asks you to narrate the Marvel Cinematic Universe storyline anytime you both decided to watch any Marvel movie?

Yes that friend, well we all have either been that friend or have a friend like that. We have decided to compile this list to help “that friend” catch up with the Marvel Cinematic Universe hype.

We are sorry, Marvel comic book fans; this guide is for those who wish to see the Marvel movies and TV series in the right order, you can go on to read those comics.

This list gives you the detailed order to which you can watch every Marvel Movie without stress.

During World War II, Steve Rogers decides to volunteer in an experiment that transforms his weak body. He must now battle a secret Nazi organisation headed by Johann Schmidt to defend his nation.

Amidst a mission, Vers, a Kree warrior, gets separated from her team and is stranded on Earth. However, her life takes an unusual turn after she teams up with Fury, a S.H.I.E.L.D. agent.

When Tony Stark, an industrialist, is captured, he constructs a high-tech armoured suit to escape. Once he manages to escape, he decides to use his suit to fight against evil forces to save the world.

Tony Stark is under pressure from various sources, including the government, to share his technology with the world. He must find a way to fight them while also tackling his other enemies.

Dr Bruce Banner subjects himself to high levels of gamma radiation which triggers his transformation into a huge green creature, the Hulk, whenever he experiences negative emotions such as anger.

The Thor film series is a run of four movies (so far) set in the Marvel Cinematic Universe consisting of Thor, Thor: The Dark World, Thor: Ragnarok, and the currently-in-development Thor: Love and Thunder. The series is anchored by Chris Hemsworth as Thor, Tom Hiddleston as Loki, and Natalie Portman as Jane Foster.

Nick Fury is compelled to launch the Avengers Initiative when Loki poses a threat to planet Earth. His squad of superheroes put their minds together to accomplish the task.

Tony Stark encounters a formidable foe called the Mandarin. After failing to defeat his enemy, Tony embarks on a journey of self-discovery as he fights against the powerful Mandarin.

Thor sets out on a journey to defeat Malekith, the leader of the Dark Elves when he returns to Asgard to retrieve a dangerous weapon and fulfill his desire of destroying the Nine Realms.

As Steve Rogers adapts to the complexities of a contemporary world, he joins Natasha Romanoff and Sam Wilson in his mission to uncover the secret behind a deadly, mysterious assassin.

Peter escapes from the planet Morag with a valuable orb that Ronan the Accuser wants. He eventually forms a group with unwilling heroes to stop Ronan.

After a successful mission, Quill and his team of galactic defenders meet Ego, a man claiming to be Quill’s father. However, they soon learn some disturbing truths about Ego.

Tony Stark builds an artificial intelligence system named Ultron with the help of Bruce Banner. When the sentient Ultron makes plans to wipe out the human race, the Avengers set out to stop him.

Ant-Man is a 2015 American superhero film based on the Marvel Comics characters of the same name: Scott Lang and Hank Pym.

Friction arises between the Avengers when one group supports the government’s decision to implement a law to control their powers while the other opposes it.

Peter Parker tries to stop the Vulture from selling weapons made with advanced Chitauri technology while trying to balance his life as an ordinary high school student.

In an accident, Stephen Strange, a famous neurosurgeon, loses the ability to use his hands. He goes to visit the mysterious Ancient One to heal himself and becomes a great sorcerer under her tutelage.

After his father’s death, T’Challa returns home to Wakanda to inherit his throne. However, a powerful enemy related to his family threatens to attack his nation.

Deprived of his mighty hammer Mjolnir, Thor must escape the other side of the universe to save his home, Asgard, from Hela, the goddess of death.

Despite being under house arrest, Scott Lang, along with the Wasp, sets out to help Dr Hank Pym to enter the quantum realm as they face new enemies along the way.

Natasha Romanoff, a former KGB spy, is shocked to find out that her ex-handler, General Dreykov, is still alive. While evading capture by Taskmaster, she is forced to confront her dark past.

The Avengers must stop Thanos, an intergalactic warlord, from getting his hands on all the infinity stones. However, Thanos is prepared to go to any lengths to carry out his insane plan.

After Thanos, an intergalactic warlord, disintegrates half of the universe, the Avengers must reunite and assemble again to reinvigorate their trounced allies and restore balance.

Living idealized suburban lives, super-powered beings Wanda and Vision begin to suspect that everything is not as it seems.

The Falcon and The Winter Soldier (2021 – Disney+ series)

As Steve Rogers adapts to the complexities of a contemporary world, he joins Natasha Romanoff and Sam Wilson in his mission to uncover the secret behind a deadly, mysterious assassin.

Shang-Chi and the Legend of the Ten Rings (2021 movie)

Martial-arts master Shang-Chi confronts the past he thought he left behind when he’s drawn into the web of the mysterious Ten Rings organization.

Loki, the God of Mischief, steps out of his brother’s shadow to embark on an adventure that takes place after the events of “Avengers: Endgame.”