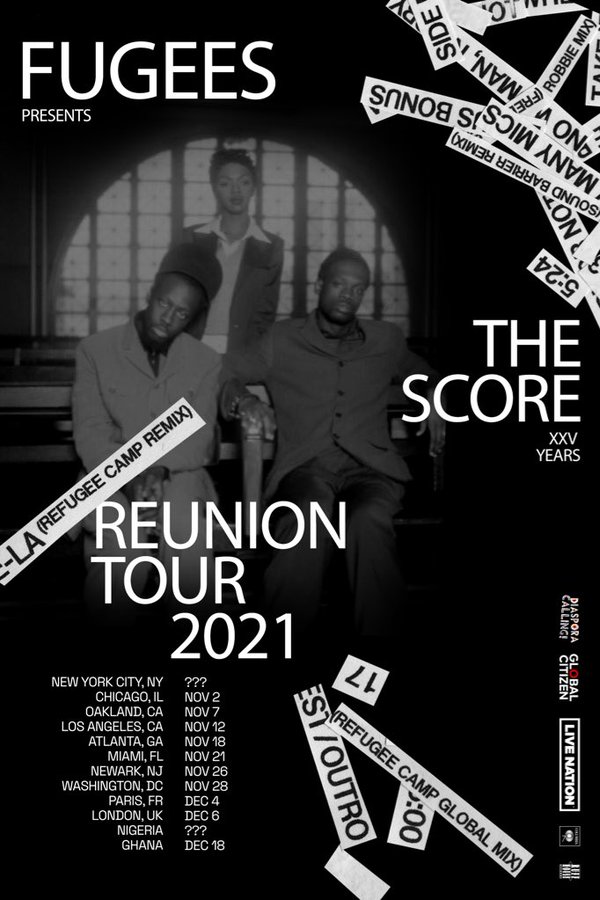 Lauryn Hill, Wyclef Jean, And Pras Michel Of the Fugees are set to bring their “The Score” 25th Anniversary Tour to Ghana. The group has reunited to announce their first tour in 25 years and their first show in 15 years. The group will perform in Ghana on the 18th of December 2021, further details will be communicated.

Tickets for the show is set to go on sale to the general public from Friday, Sept 24.

Fugees is an American hip-hop group formed in the early 1990s. Deriving its name from a shortening of the word “refugees”, the group consisted of Haitian Wyclef Jean, Haitian-American Pras Michel, and American Lauryn Hill.

In a statement according to Variety, Hill said, “The Fugees have a complex but impactful history. I wasn’t even aware the 25th anniversary had arrived until someone brought it to my attention. I decided to honor this significant project, its anniversary, and the fans who appreciated the music by creating a peaceful platform where we could unite, perform the music we loved, and set an example of reconciliation for the world.”

Jean stated, “As I celebrate 25 years with the Fugees, my first memory was that we vowed, from the gate, we would not just do music we would be a movement. We would be a voice for the unheard, and in these challenging times, I am grateful once again, that God has brought us together.”

This will not be the first time Lauryn Hill has performed in Ghana. In 2018, Lauryn Hill thrilled fans of Afrochella, Lauryn’s appearance at BBnZ Live was part of Afrochella pop-up store to sell merchandise for her ‘Miseducation’ album’ 20th anniversary.