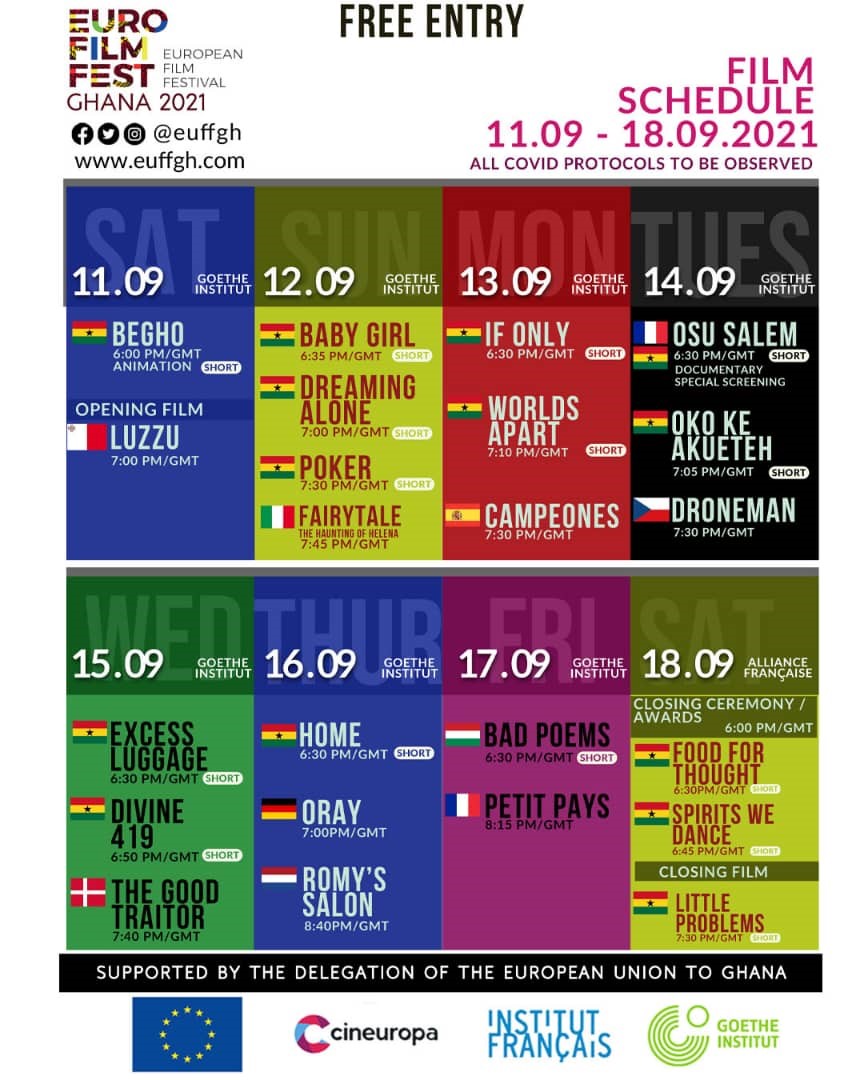 European filmmakers and their colleagues in Ghana will in the coming days have the opportunity for cultural exchanges, collaboration and cooperation as the European Union hosts its annual film festival in Ghana.

The 2nd “European Film Festival (EUFF) Ghana 2021” will take place from 11th to 17th September 2021, at the Goethe-Institut, Accra, and close on 18th September 2021 at Alliance Française, Accra. It will showcase nine recent European films, giving film-lovers in Ghana a taste of Europe’s diversity and creativity. Alongside the European movies selected, the EUFF offers emerging Ghanaian filmmakers an opportunity to showcase their work at the festival.

Eleven short films from Ghana and the diaspora have been selected as part of an overall 23 films scheduled to be featured at the week-long festival. As a precursor to the festival, a series of webinars featuring key industry players have been running to discuss critical challenges confronting the Ghanaian film industry.

The Ambassador of the European Union to Ghana, H.E. Irchad Razaaly said, “The European films selected reflect the variety we have within Europe. I am also happy that the eleven Ghanaian short films have been selected, as most of the producers are young people. Supporting the youth in Ghana is a priority for the European Union.”

Aseye Tamakloe, the Festival Manager described the festival as one that offered the opportunity to filmmakers in Ghana to share Ghana’s rich culture and diversity to a global audience.

“We want to see the Ghanaian film industry grow. I believe the European film festival offers the platform for stakeholders to interact and share ideas on how we can collaborate and promote our culture through our works.”

The European Film Festival in Ghana is a partnership project of the Delegation of the European Union to Ghana and nine other European embassies and cultural institutions. The European Union as part of its efforts to foster cultural exchanges, collaboration, and cooperation between Ghana and Europe instituted the festival, a week-long celebration of films from Europe and Ghana.

The festival is organized in cooperation with CineEuropa and ably supported by the Embassies of Malta, Denmark, Czech Republic, Netherlands, Spain, Italy, France, Hungary and Germany, Goethe-Institut Ghana, Institut Francais, and Alliance Française. The festival is open to the public and all screenings are free of charge.