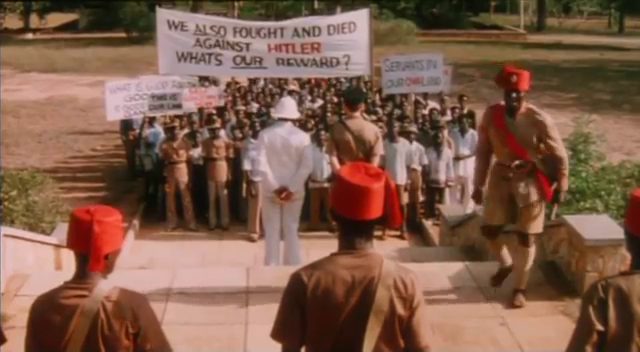 The Ghanaian movie industry in the late 80’s, 90’s and early 2000’s were buzzing with the best of movies that spoke about the colonial era and the impact it had on us. The movies released were well thought through and had academic pieces and reviews written about them.

Though same cannot to said about the current movie industry, were are happy to still have some digital collection of the best Ghanaian Classic movies you can enjoy.

The movie was released in 1989 and was directed by the late Kwaw Ansah.

The journey to find greener pastures by any means possible has been around for some time and the story told in Deadly Voyage which is based on a terrifying true story of one ship and the nine stowaways hiding beneath its deck, is a reminder of the dangers.

Hoping to find a better life, dockworker Kingsley Ofasa (Omar Epps) and eight other Ghanaian refugees stow away on a Ukrainian cargo ship headed for the United States via France. The ship’s sailors discover the refugees when they search for water. Because of an earlier violation in New York City, the captain told the crew that they would be responsible for any new fines. The crew decides to avoid any penalty by murdering the stowaways, who must fight to stay alive until docking in France.

The Good Old Days: The Love Of AA

Although shot in 2010 by the famous Kwaw Ansah, the movie is about family of eight which is set in the 1950s and 1960s. If you are looking for an educative movie filled with comedy,love, and tragedy then “The Good Old Days: The Love Of AA” is your movie.

The good old days” is the umbrella title of Kwaw Ansah’s (a renowned film writer and Director, who needs no introduction as far as the film industry is concerned) next film project. The package consists of 24 episodes, with different subtitles, treating different themes relevant to the Ghanaian family life as in the “Good Old Days

Kukurantumi Road To Accra is a movie which still speaks on some issues surronding poverty and class struggle within Ghanaian society.

Synopsis- In this revealing African comedy-drama that contrasts the hectic life in Accra, the capital of Ghana, with the relative peace of Kukurantumi, a rural town, a truck driver makes runs between the two locations with few problems until he is forced to replace his truck. In order to raise the money to get a new vehicle, he sells some stolen watches and promises his daughter in marriage to a rich merchant. Rebelling against this fate, the daughter runs off to Accra with her boyfriend — but then nothing turns out quite like she had planned, and the rich merchant looks better with each passing day.

Prostitution in Ghana had a lot of marriages shaking and the only was to tackle this issue was through visuals. Diabolo was shot to tackle prostitution is Ghana. Release in 1992 is a Ghanaian classic movie that tells a story of a man who has the power to transform into a serpent. The man uses this power to sexually assault and kill women, mostly prostitutes. This role was played by Bob Smith Jnr, now referred to as Diabolo Man or Snake Man in the acting circles. The film also cast actors like Rev. Eddie Coffie, Eunice Banini and Prince Yawson known as “Waakye”.

Written and Direct by Ernest Abbeyquaye, Escape To Love is about the pressure parents give to their daughters when it comes to marriage and finding a suitable partner. Under pressure to marry, Kwesi Aboagye meets Amina who has run away from a man she is betrothed to. Kwesi fights to keep Amina in spite of Amina’s angry mother and everything thrown in his way.

Love Brewed In The African Pot

The topic of class and the effects it had on young lovers is evident in this movie. Just like the famous Romeo and Juliet, Kwaw Ansah’s Love Brewed in the African Pot is an interpretation of Romeo and Juliet which is set in colonial Ghana, that explores tensions between tradition and modernity.

The film takes place in Ghana during the colonial period. Aba Appiah, a woman born to a family of privileged settlers, falls in love with Joe Quansah, a fitting mechanic and son of a simple fisherman. Aba’s father, Kofi Appiah, a retired civil servant, is opposed to their marriage, which goes against his plans for his daughter, to whom he had already chosen a husband. This family conflict leads to complex and unforeseen consequences.