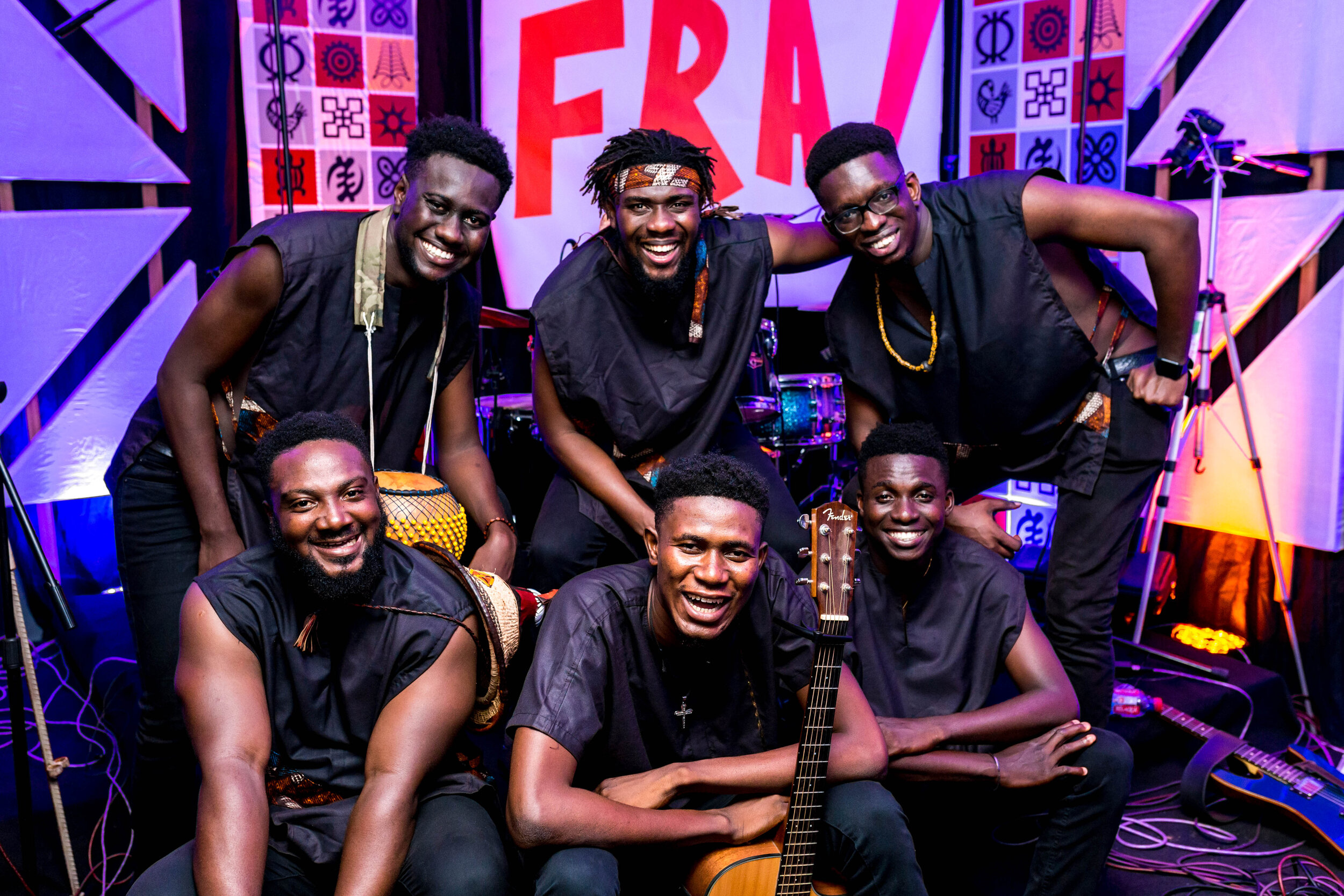 Living in Ghana means you are going to have to experience Live band one way or the other. Just hearing the African rhythms mixed with each band’s own style is so melodic and will have you on your feet in few minutes.

There are a lot of places to experience Live Band performances +233 Jazz Bar and Alliance Francaise just to name a few are the best options for the best night hangout with family and friends.

Despite having most Ghanaian artists performing Live on stage with their bands, there are some Ghanaian bands who are commercial with their music, Topping European Charts like Santrofi Band to Touring and performing in Spain like The Band Fra.

Each band has its own unique style which makes their music very pleasing to their audience. Enjoy the best of Ghanaian Live Band Music with these 4 amazing Bands.

The FRA! band is a group of young people from different backgrounds united by one language; the language of music. The name ‘ FRA’ comes from the Akan Language ( a local Ghanaian language) and it means mix – FRA! stands for surprisingly fresh sounds mixed to dance-able and enjoyable feel-good music – from afrobeat, high-life to afro-funk!

FRA! was birthed in the heat of Accra and they channel this heat with them on stage wherever they go. FRA! is on a quest to redefine live Afrocentric music on the continent and beyond.

FRA! is a band of excellent young musicians with high energy who provide infectious songs and make the crowd dance after the first seconds on stage.

Their genre cuts across Ghanaian Traditional music with the fusion of soul music,afro-funk, highlife, hiplife, rap music, and afro beats.

They have a repertoire which keeps our audiences on the edge over a long period, oftentimes between forty-five to sixty minutes.

Their music speaks mainly about, societal issues, people, places, African politics, nature and love. The lead vocalist has a unique and smooth voice and songs drawn from the English, Pidgin English, and Twi and Ga dialects.

The band’s creative outlook has been boosted over the last years through performances of high-profile Ghanaian musicians including Akan, Worlasi, Cina Soul, Adomaa, M.anifest, Jojo Abot, and many others.

Their performances are often fused with choreography dance from band members and the lead vocalist which draws audiences into every moment of the show.

Santrofi is a modern highlife band from Accra, Ghana. It was founded by bassist and producer Emmanuel Ofori.

Ofori became a bandleader after playing will well-known Ghanaian artists such as Ebo Taylor, Pat Thomas, and Kwashibu Area Band.

The Santrofi band includes eight musicians who perform music with roots in vintage Ghanaian highlife music. The influences include 1970s dance-guitar highlife and highlife funk as well as polyrhythmic beats and tunes from Afrobeat.

Santrofi, made history last year as the first Ghanaian band/artist to have a debut album topping the World Music Charts Europe for the month of July 2020.

The band wears skeleton masks to highlight the point of our shared humanity and to remind the world that we are one people regardless of sex, race or social status.

They fuse all styles of music, especially African rhythms, with rock. The band constitutes 5 musicians and a poet who acts as their Chief Priest. Legend has it that the Chief Priest evoked them from the dead to come and entertain and educate the world through the most expressive style of music, rock.

The masks give the band a uniform identity and hide individual egos and differences just as they expect the people of the world to see themselves as an important unit in a big team working for a better world.

Dark Suburb represents the forgotten corners of the society wherein lurks great talent and potential. The evocation from the dead is a rejection of stereotypes and a refusal to be incapacitated by one’s circumstances. No matter who you are and where you are from, no matter what society says you are and where you must be, you can assert your place in this world and define who you want to be.