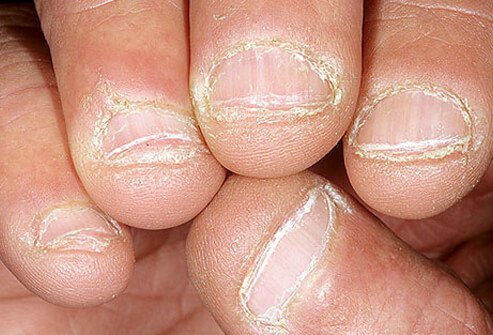 Have you ever seen someone with ”naturally” black nails and wondered how it got that way? Well, your nails tell a lot about your health than we realise and the way they look can reveal a deeper health issue you have.

One of the most common causes of yellow nails is a fungal infection. Smokers may yellow their nails with tobacco. If some cases, yellow nails may indicate psoriasis, thyroid problems, or diabetes.

Nail brittleness can be caused by a variety of reasons be it drugs, trauma to the nail or nutrient deficiencies. When brittle nails split, the name your dermatologist will use depends on how they split.

People chew their nails as a stress relieving habit and it’s common mostly among kids but some adults are culprits as well. The technical term is “onychophagia”. Nail biting has also been linked to obsessive-compulsive disorder. Chewing your nails leaves them looking raw and rough but other health problems may include: you ingesting intestinal parasites and getting fungal nail infections.

4. Dark lines beneath the nail

Black lines (which can appear brown or dark red) look like splinters. The most likely cause is a trauma to your nail, such as accidentally slamming a door on your finger. If you’ve not had any trauma to the nail, it’s important that you have a biopsy to rule out skin cancer.

Nails which are coloured blue may indicate that the body isn’t getting enough oxygen. It could also indicate a lung problem such as emphysema. Some heart problems can also be indicated by bluish nails.