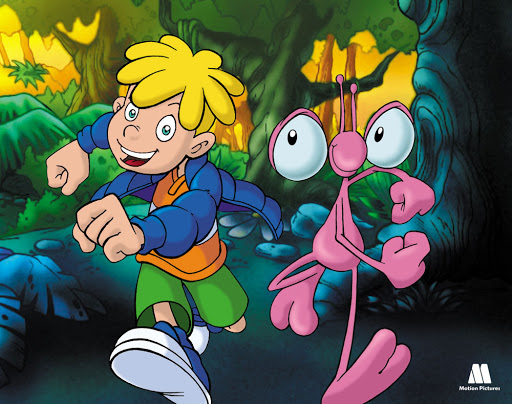 It is time to feel nostalgic all over again. In this episode of our Kuulpeeps Bingelist, we have compiled a list of cartoons that defined our childhood and gave us some reasons to stay home.

Growing up, we all had that one cartoon we couldn’t wait to watch after school or kicking off the weekend on Saturday morning. Our childhoods were flooded with different cartoons that taught us different things.

From Tom and Oscar teaching us all about science and Tinga Tinga Tales teaching teaching us about the exotic African animals in the wild.

Take a trip down memory lane with these list of cartoons

Professor Leonard is the classic mad, bizarre and eccentric scientist . His amazing inventions often end with unpredictable results. However, thanks to these inventions, his nephew Tommy becomes a superhero intent on protecting the world from Caesar, an unscrupulous businessman.

Tommy, a 10-year-old boy with his alien friend Oscar and his friends Yukari and Peter along with his uncle, Professor Leonard, join forces to stop the evil desires of Caesar. His strategies for getting rich, however, are diabolical plans to make money quickly without considering the disastrous consequences.

Fortunately, our heroes are not alone. There are Yukari, an expert in martial arts, and Peter, a talented black musician. Together they will have to save animals, protect forests and reveal complicated secrets.

A bionic policeman called Commander Stargazer recruited the SilverHawks, heroes who are “partly metal, partly real”, to fight the evil Mon*Star, an escaped alien mob boss who transforms into an enormous armor-plated creature with the help of Limbo’s Moonstar. Joining Mon*Star in his villainy is an intergalactic mob: the snakelike Yes-Man, the blade-armed Buzz-Saw, the “bull”-headed Mumbo-Jumbo, a weather controller called Windhammer, a shapeshifter known as Mo-Lec-U-Lar, a robotic card shark called Poker-Face, the weapons-heavy Hardware, and “the musical madness of” Melodia who uses a “keytar” that fires musical notes.

Quicksilver (formerly Jonathan Quick) leads the SilverHawks, with his metal bird companion Tally-Hawk at his side. Twins Emily and Will Hart became Steelheart and Steelwill, the SilverHawks’s technician and strongman respectively. Country-singing Bluegrass piloted the team’s ship, the Maraj (pronounced “mirage” on the series, but given that spelling on the Kenner toy). Rounding out the group is a youngster “from the planet of the mimes”, named “The Copper Kidd” and usually called “Kidd” for short, a mathematical genius who spoke in whistles and computerized tones. Their bionic bodies are covered by a full-body close-fitting metal armor that only exposes the face and an arm, the armor is equipped with a retractile protective mask, retractable under-arm wings (except Bluegrass), thrusters on their heels, and laser-weapons in their shoulders.

Hooper the grasshopper arrives in Dog City that he finds is divided into two rival zones -one controlled by The Hawks and the other being the domain of The Dynamics. Acting as a kind of go-between and intermediary, all the old scores are sportingly settled on the basketball court in games that test the limits of fair play, friendship and bravery.

Dennis and his pet dog, Gnasher, live by just one rule: Kids should make all the rules! Because, as everyone knows, playing by adult rules is no fun for any kid. So the two pals set out to have as much fun as humanly — and animally — possible by pushing limits, crossing lines and generally testing the patience of the residents of Beanotown, where Dennis lives with his mother, father and little sister, Bea. The animated series is based on the British comic strip “Dennis the Menace,” later titled “Dennis the Menace and Gnasher,” which — like the American comic strip of the same name that also first appeared in 1951

A colourful imagining of African jungle tales and why these exotic animals look the way they do. From a leopard’s spots, to a zebra’s stripes, to an elephant’s trunk, they’re much more important than they look.

SWAT Kats: The Radical Squadron is a 1993-1994 American animated television series created by Christian and Yvon Tremblay. Set in a world of anthropomorphic felines, this series follows the high-flying adventures of Chance “T-Bone” Furlong and Jake “Razor” Clawson. Members of Megakat City’s elite law-enforcement agency, the pilots become grounded after their pursuit of archvillain Dark Kat sets them at odds with the headstrong Commander Feral. Reassigned to duties at a military salvage yard, Chance and Jake create their own high-tech jet from discarded parts and dedicate themselves to protecting the city in their secret identities as the SWAT Cats. Armed to the teeth and ready to roll, these masked vigilantes continue their quest to bring down Dark Kat and other threats to the city, including recurring baddies the Pastmaster, Dr. Viper and Hard Drive.

`Rugrats’ reveals the world from a baby’s point of view. Everything looks bigger, more mysterious and uncontrollable. Angelica, the oldest, likes to terrorise her cousin, Tommy, and his friends, and is famous for screaming, “You stupid babies!” The adults in the series are often clueless.