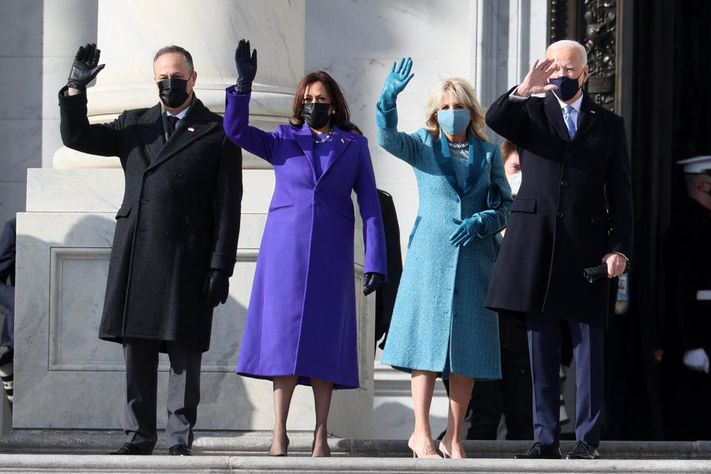 At the inauguration of Joe Biden and Kamala Harris yesterday, fashion was at the fore front of it all. Maybe it wasn’t planned but it was impossible to ignore how the new administration used what they wore to tell a story in a moment when the eyes of the world were on them.

For his swearing-in ceremony, Joe Biden wore a custom-made navy suit and overcoat by Ralph Lauren, a popular choice among American presidents and First Ladies except Trump and his wife.

Jill Biden wore a vibrant tweed blue coat, matching dress (and a silk face mask in the same ocean hue) by emerging American designer Alexandra O’Neill of Markarian. According to a press release from the New York-based label, the color blue was chosen to “signify trust, confidence and stability.” (Source: forbes.com)

Ms Harris wore a bright purple coat and dress designed by Christopher John Rogers, worn with her signature pearls and a little flag pin. According to CNN’s Abby Phillip, the color was a nod to the trail-blazing Shirley Chisholm, the first Black woman elected to U.S. Congress who ran for president in 1972, but it can also be seen as a symbolic uniting of red and blue — as in the red state and blue state divisions that have characterized the country for the last four years. Her husband wore a Ralph Lauren suit. (Source: dothaneagle.com)

Michelle Obama, a fashion icon, drew praise from fans on social media for her belted pantsuit in plum, by LA-based Sergio Hudson. The outfit comprised a turtleneck sweater and wide-legged bootcut pants, with a structured coat helping her strike the balance between understated elegance and power dressing. Her wavy, voluminous hair generated significant buzz on social media as she arrived at the inauguration with her husband as people kept tweeting about it. (Source: cnn.com)

The fact that most of them wore outfits from upcoming designers made a meaningful statement at this particular time, when all small businesses, including fashion businesses, are in need of support.