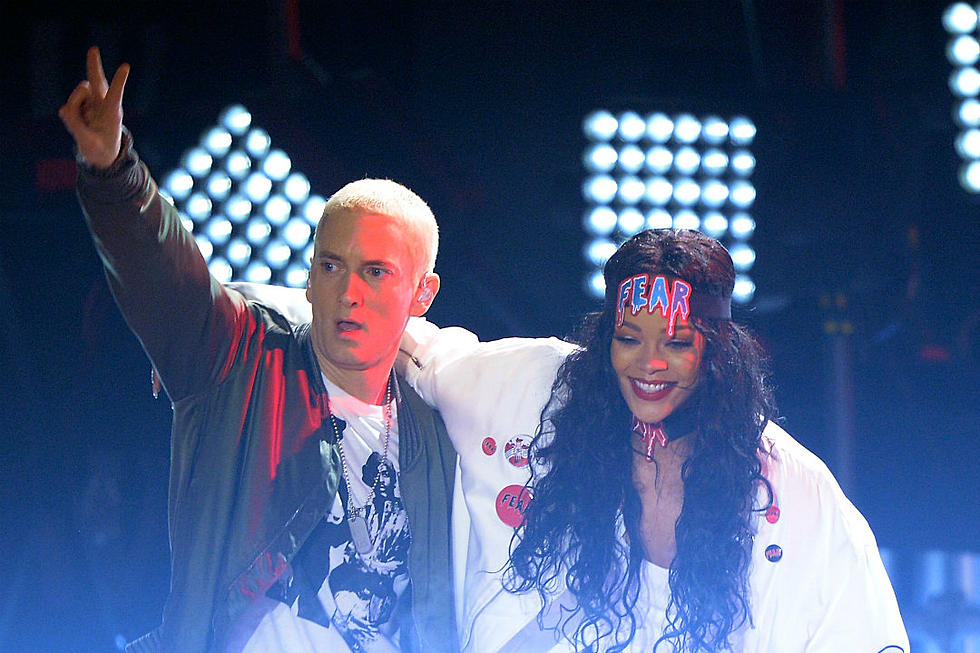 Eminem, fresh off a surprise cameo in Pete Davidson’s Santa-themed “Stan” update, dropped off Music to Be Murdered By – Side B on Friday.

Toward the end of the new collection, Em enlists White Gold for the lyrically expansive “Zeus,” which kicks off with a few lines addressing the quality of 6ix9ine’s catalog and Em’s still-heavily-discussed feud with recent Tickets to My Downfall chart-topper Machine Gun Kelly:

“She says I am trash but she listens to Tekashi, Bitch, you lost me,Fair weather, wishy-washy ,She thinks Machine washed me,Swear to god, man, her favorite rapper wish he’d crossed me“

At the end of the first verse, Eminem—noting a “re-promise to be honest”—offers an apology to Rihanna over a leaked track that saw him rap “Of course I side with Chris Brown, I’d beat a bitch down too.” The leak came to light in November of last year, ultimately resulting in a statement from an Em spokesperson to XXL explaining that the leak was “over 10 years old.” The rep said Em scrapped the line and rewrote it, adding that he and Rihanna “have a great relationship.”

In “Zeus,” Em says the leak “wasn’t meant to cause [Rihanna] grief” while also stating it was “wrong” to have written the line in the first place:

“But me, long as I re-promise to be honest, And wholeheartedly, apologies, Rihanna, For that song that leaked, I’m sorry Ri, It wasn’t meant to cause you grief, Regardless, it was wrong of me“

K.Junior Brings Back Some Ghanaian Classics With New Project “The Love Covers, Vol. 1”

May 11, 2021
Princess Allotey, an international student from Ghana, was selected as one of the two keynote speakers to address Centre College's Honors Convocation held virtually...

What You Need To Know To Start Promoting Your Business On...

Here’s How The Duolingo App Can Get You Into A University...

How To Handle Conflicts With Your Roommate As A University Freshman