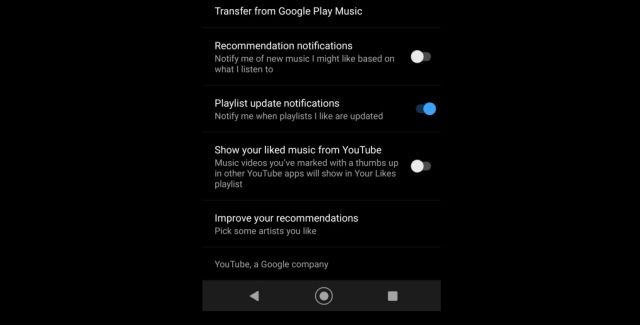 The forced transition from Google Play Music to YouTube Music is upon us, and for those making the switch, one annoying aspect of the new service has been how it blends random videos from YouTube in with music. As far as YouTube Music is concerned, likes on traditional YouTube videos that happen to be tagged as music are the same as like on songs, which leads to duplicates if you’ve liked a song and a video separately, or suddenly hearing your niece’s school play mixed in with the rest of your playlist.

Android Police points out that recently a toggle appeared in the settings menu to fix this, allowing users to opt-out of seeing any of their likes from YouTube while they’re using the YouTube Music website or app. However, as they note, one issue is that it doesn’t work in reverse, so your likes from the Music app still bleed over to the video side.

YouTube has been diligently filling in the holes on its music service with increasing speed over the last year, even if this change is coming a bit late in the game. I’m still not entirely happy with the audio quality of YouTube Music compared to Google Play, but fixing this problem will keep me around as a subscriber for a bit longer.