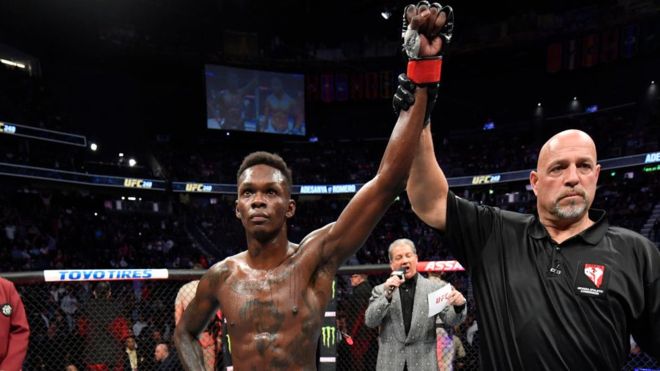 Israel Adesanya has retained his middleweight title with a utterly one-sided beatdown of Paulo Costa at UFC 253 on Fight Island. Adesanya dominated the fight from start to finish, ending proceedings in with a minute to fight in the second round after systematically breaking the Brazilian down.

It’s Adesanya’s second defence of the middleweight title after a decision victory over Yoel Romero in March.

The Kiwi Nigerian was criticised for the win over Romero, but left no doubts about his talent and skill in despatching Costa after a heated and – at times ugly – build-up.

“Because of what happened last time, everyone saying ‘he’s so boring,’ but I had to make y’all remember why we the best,” he said after the win.

“I’ve been telling you.”

Adesanya used his post-fight speech to line-up a fight with Jared Cannonier if the American gets through Robert Whittaker next month. Whittaker and Cannonier will fight in the co-main event spot at UFC 254 before Khabib Nurmagomedov and Justin Gaethje unify the lightweight title.

Red welts and bruising was visible on Costa’s leg at the start of the second round, as Adesanya started to find other targets, including a nice high kick which opened a cut on Costa’s head.

Virutally immobilised by the leg kicks, Costa was in serious trouble when Adesanya smelled blood in the water.

A beautiful check left hook – similar to the one he dropped Robert Whittaker with last year – dropped Costa to the canvas before ground and pound saw the fight stopped.

In the co-main event, Jan Blachowicz earned an incredible second round knockout victory over Dominick Reyes to claim the light heavyweight title.

It’s the first time in a decade someone other than Jon Jones or Daniel Cormier has held the belt and came as a huge betting upset.