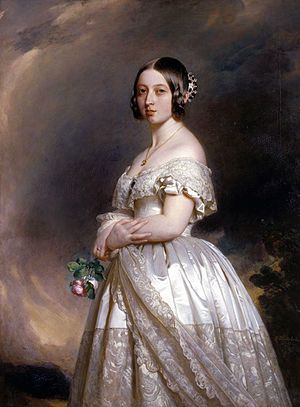 Though white is now seen as a symbol of virginity and purity, in the mid-19th century, white was the color of mourning—not a color in which to be wed.

Queen Victoria was the first to wear white at a wedding and was seen as stylish but too conservative for doing so.

She designed the dress herself when she was going to marry her cousin, Prince Albert of Saxe-Coburg, on Feb. 10, 1840.

Less than a decade after Victoria married her Albert, the Godey’s Lady’s Book (an American women’s magazine that was published in Philadelphia. It was the most widely circulated magazine in the period before the Civil War) wrote: “Custom has decided, from the earliest ages, that white is the most fitting hue, whatever may be the material. It is an emblem of the purity and innocence of girlhood, and the unsullied heart she now yields to the chosen one.”

After Queen Victoria’s white dress, however, the trend caught on. Now, hardly will you find a wedding dress that isn’t white.