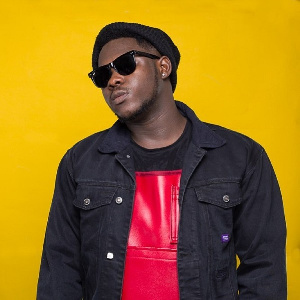 Like the American Hiphop star, Kendrick Lamar, whose got different unique voices he applies on different songs, Medikal does a similar thing.

We were just listening to the AMG rapper and it hit us that he may or may not be deliberately using specific voices for specific kinds of songs.

If it’s deliberate, it’s working because nothing keeps fans alert than switching your style on different songs!

This is the voice we hear on the Dondo remix for instance. It’s one of our favourite Medikal voices. He lets out his verse in a lazy drawl and lowkey disses a few people along the line. It almost always sounds like he just took seconds to put those verses together and is in no hurry to rush the flow. He started his rap on Kelvyn Boy’s Loko with that lazy drawl and used it on Amanfuor Girls too. That voice is lowkey fire and makes us excited roff!

There are times Medikal just goes in straight and hard in a normal voice and attacks the beat like the rapper he is. We are talking the voice on 911, on Joey B’s FOH, on Confirm and more.

On love songs Medikal almost always brings his voice to a low soft level on every love song. From Too Risky, to Ayekoo, it’s almost like the thought of his love life softens him up.

This almost high pitched voice is slowly becoming Medikal’s trademark voice. He’s rapped more verses with this voice and it’s where he usually says the most annoying things lol. Remember the Child Abuse remix? Remember the How Much remix? He practically did more than one voice on that song.

Listen to Kpoo Keke… he switched from the serious voice to the high pitch to his lazy drawl!

Maybe we are over reaching but… have y’all noticed that he does have different voices for different sounds?