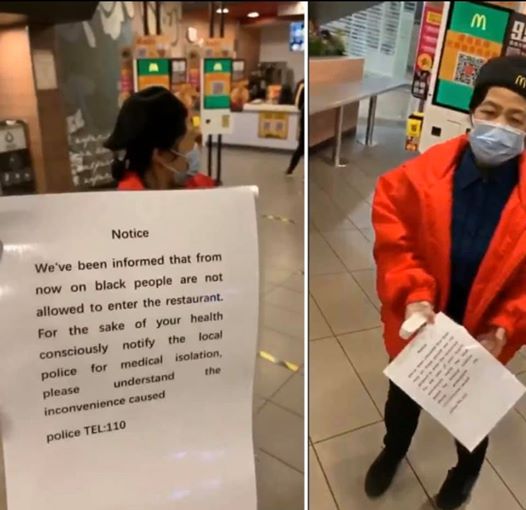 Since the later part of last week, we have been receiving disturbing reports of Chinese racially abusing Africans and people of African descent over fears of spreading coronavirus.

This abuse against Africans came after it was reported that in the Guangdong province, of which Guangzhou is the capital, 183 people have returned from abroad with the virus since it began spreading outside China.

Meanwhile, only 22 were from Africa, according to official figures. Also, out of the city’s 30,000 foreigners population, only 4,500 are Africans.

Yet, the Chinese still blamed Africans of bringing what could be a second wave of infections of coronavirus in the city.

One widely shared video showed a McDonald’s employee holding a sign stating that “from now on black people are not allowed to enter the restaurant.”

These incidents prompted the U.S. Consulate in Guangzhou to warn African Americans about discrimination. Police had ordered bars and restaurants not to serve clients who appear to be of African origin, it wrote in an advisory to Americans in China.

Local officials were implementing mandatory coronavirus tests followed by mandatory self-quarantine “for anyone with ‘African contacts,’ regardless of recent travel history or previous quarantine completion,” the consulate wrote.

The Minister of Foreign Affairs and Regional Integration Shirley Ayorkor Botchwey also summoned the Chinese ambassador to Ghana to formal protest against the inhumane treatment of Ghanaians and other Africans in China.