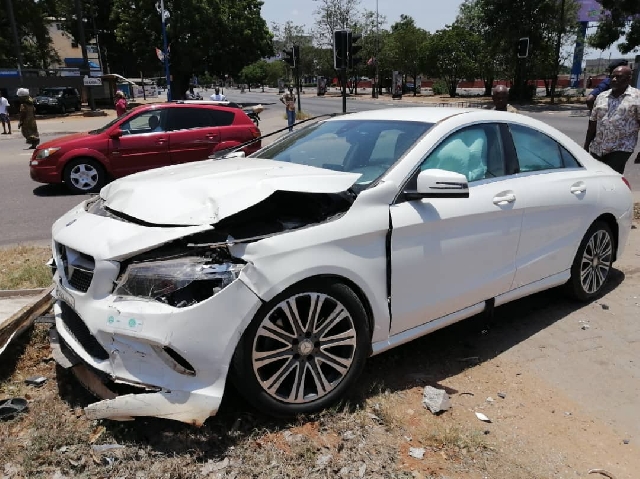 A foreign national got trapped in a Mitsubishi ASX vehicle after it was involved in an accident at the 37 enclave in Accra on Wednesday, 8 April 2020.

The accident, which involved three vehicles, a Mercedes Benz ELA 250, a Mitsubishi ASX and a Hyundai i10, occurred in the morning.

Host of Class91.3FM’s Executive Breakfast Show (EBS), Benjamin Akakpo, who witnessed the accident, said the driver of the Mercedes Benz, which was driving from the Legon-Airport road, in an attempt to beat the red light, run into the Mitsubishi ASX, which was coming from the Burma Camp-37 side.

Also, the driver of the Hyundai i10, which was driving behind the Mitsubishi at the time of the accident, rammed it.

All three cars were badly damaged.

The trapped foreign national in the mangled Mitsubishi, was rescued and taken to the Nyaho Medical Centre by some prison officers who were enforcing the lockdown directives.