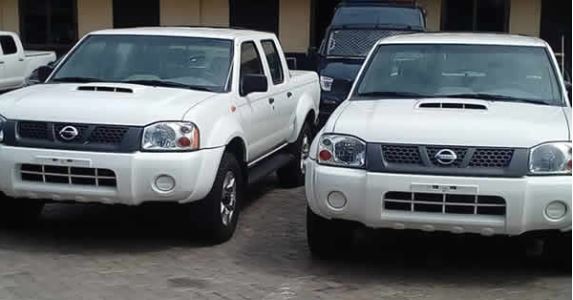 The suspects, Prince Okafor, 36 and Augustine Okafor, 24, all Nigerians, were arrested by an officer of the Formed Police Unit (FPU) at Tesano on March 24 while attempting to smuggle the vehicles out of Accra.

According to Myjoyonline sources, the vehicles were among 10 others of the same kind that had been purchased by the government from Svani Company.

They had been taken to a washing bay on the Spintex road for cleaning.

It was there that the suspects, who were said to have been aided by one of the guys who work at the washing bay, took two of the vehicles and drove them away.

The arresting officer, who had closed from work on the day, was suspicious of their movements when they got to the Abeka junction and true to his suspicion, the suspects drove off when the traffic light there turned green.

He pursued them until they got to the Achimota Neoplan terminal where the light had turned red, enabling the officer to drive past them and impeded their movement.

The source said just when the armed officer pulled out of his vehicle and approached the drivers of the two vehicles, one of them immediately took to his heels leaving the other driver with three other occupants in it.

The officer then asked them to follow him to the Tesano police station while they call the supposed owner to come there to confirm that the vehicles were for him.

While that was going on, the three other occupants also fled leaving the driver.

The officer then reached out for a re-enforcement team from the FPU base at the National Police Training School at Tesano, who arrived on time to tow the vehicles and the suspects to the Tesano police station.

Yung D3mz Latest Single “Fever” Is A Song About Love And...

June 13, 2021
Giving fans what to expect from his upcoming Ep, Ghanaian Producer Nicholas Edem Coffie, known as Yung D3mz has released his much anticipated single...

Quavo Reveals He And Pop Smoke Were Working On A Collab...

The Art Of A Protest: 5 Amazing Artworks That Told Nigeria’s...