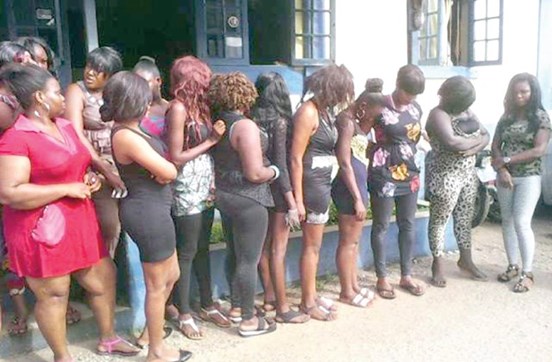 The Northern Regional Security Council (REGSEC) has announced a ban on prostitution and its related activities in the region in a latest move by authorities to stop the spread of the outbreak of coronavirus in the area.

Ten of the 204 coronavirus cases confirmed in the country are from the Northern regional capital, Tamale, which is now the city with the second-highest cases after Accra.

One of eight Guineans who tested positive for the deadly virus and were being kept in an isolation centre in Tamale on Monday scaled a wall to escape from quarantine.

Efforts at getting her arrested have so far not yielded any results, triggering what some have described as fear and panic among residents.

The REGSEC in a statement on Tuesday, March 31 said drastic measures against practices like prostitution, ought to be taken to curtail the spread of the virus “to ensure the health and safety of everyone” in the area.

Although prostitution is already banned in Ghana, the REGSEC in a statement signed by the Regional Minister Salifu Sa-eed said they have decided to ban the practice, which is widespread in the country, particularly in the cities.

“Those involved in the practice and its related activities within the region are therefore advised to cease any engagement in those acts, forthwith” the statement said.

Per section 276 of the Criminal Code, 1960 (Act 29) “any person who persistently solicits  or  importunes  in  any  public  place  or  in  sight  of  any  public  place  for  the purpose of prostitution shall be liable for a first offence to a fine and for a second or subsequent offences shall be guilty of a misdemeanour.”

It said the coronavirus cases so far recorded in Tamale should be a wakeup call to all the people, and urged them to abide by directives issued by authorities to prevent spread of the coronavirus which has killed five people in Ghana already.

The REGSEC said there underscored the need for all “to restrain ourselves against any practices that will expose us to any danger”.

It warned that anyone who defies the prostitution ban directive “will be dealt with strictly in accordance with the laws… We appeal to the citizenry to be vigilant and report any of such cases to the security agencies”.