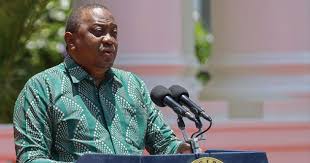 Kenya’s President, Uhuru Kenyatta has apologized to the public after reports of police brutality as officers implemented a curfew to curb the spread of coronavirus.

“I want to apologize to all Kenyans, maybe for some excesses which were conducted or happened,” Mr Kenyatta said in a broadcast shared by Citizen TV.

The curfew between 19:00 and 05:00 local time was introduced last Friday, but it was controversially enforced by police officers who were captured on camera using whips, batons and firing tear gas on commuters.

At least two people have reportedly been killed by police action, including a 13-year-old boy who was hit by a stray bullet on Monday evening.

Mr. Kenyatta said that the measures introduced by the government were necessary to curb the spread of Covid-19, the respiratory illness caused by coronavirus.