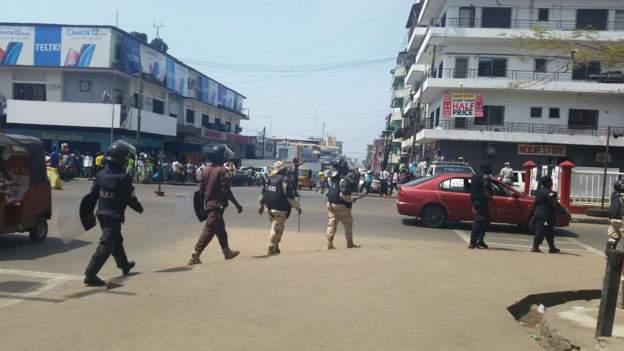 Riot police have been deployed in Liberia’s capital, Monrovia, to maintain order as thousands of angry roadside sellers took to the streets to protest the demolition of their stalls.

The demolition was part of government’s measures to discourage gatherings in order to prevent the spread of coronavirus.

The market sellers woke up on Monday morning to find their stalls had been demolished overnight without prior notice.

In reaction, they marched through central Monrovia on Monday afternoon chanting “no tables, no stores,” and forcing foreign-owned stores to shut their doors since they, the locals, were not being allowed to sell.

Columns of riot police were seen marching and taking positions at key intersections as the marketers’ protest entered the city centre.

But in a country where people live far below the poverty line, many have to flout the order to get out in search of food and basic necessities.