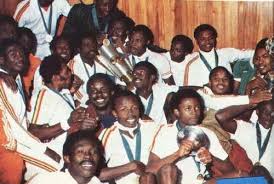 On this day on March 19, 1982, Ghana became the first African country to win the African Cup Of Nations trophy, defying all odds to beating the host nation Libya 7-6 om penalty shoot-out.

This is the last time Ghana won the AFCON cup. It’s been 38 years since Ghana last won the Trophy, a disappointing on the side of the Blackstars.

Ghana shot into the lead in the 35th minute through George Alhassan, the oldest player of the Black Stars squad. The Libyans sensing defeat, threw everything upfront and succeeded in finding the equalizer in the 70 minutes through Beshari.

The rest of regulation time produced no more goals after 120 minutes ushering in the first-ever tie-breaking exercise in a final to be decided on penalties.

Ghana on their way to their fourth title, drew 2-2 with the host nation, Libya who were making their debut in the competition, before tying 0-0 against Cameroon and registered a 1-0 win over Tunisia to advance from the group stage.

In the semifinal, Ghana overcame a two-goal deficit to beat Algeria by 3-2 in extra time through two goals from George Alhassan (64 and 103) and a goal from Opoku Nti (90).

September 24, 2021
Have ever had that one friend who always asks you to narrate the Marvel Cinematic Universe storyline anytime you both decided to watch any...

How To Get Over The Hard Parts Of Turning A Hobby...

Take This Quiz And We’ll Tell You Which Social Media App...

Darkovibes Gets Davido To Sing In Ga In His New Single...

3 Apps You Can Use To Make A Cartoon On Your...

The Pros And Cons Of Having A Short-Term Loan As A...

#ThatNSSLife: This NSS Person Shares Their Working From Home Experience For...