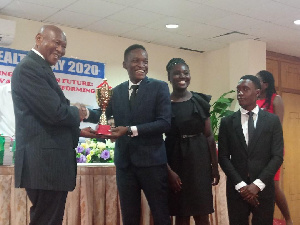 The University of Ghana (UG) Debate Society on Monday beat the University for Professional Studies, Accra (UPSA) to lift the trophy of the 71st Commonwealth Day debate.

The event, which was held for tertiary and basic educational institutions in Accra was organised by the Commonwealth Human Rights Initiative (CHRI) as part of activities marking this year’s Commonwealth Day.

Members of the UG Debating Society, who participated in the debate included Mr Michael A. A. Koranteng, Mr Abdul Fatawu and Madam Prisca Amponsah.

At the end of the debate on the topic: “Is the Commonwealth Still Relevant”, the UG Debating Society scored 254 points to lift the trophy together with some assorted books for their Society.

Whereas, the UPSA Debating Society, which had 187 points, also received a trophy and some assorted books for their Society.

Commonwealth Day is an annual celebration observed on the second Monday of March by people all over the Commonwealth in Africa, Asia, the Caribbean and Americas, the Pacific and Europe.

The Commonwealth is a political association of 54 member states, mostly former territories of the British Empire.

This year’s event is centred on the theme: “Delivering a Common Future”, highlighting how the 54 member countries in the Commonwealth family are ‘innovating, connecting and transforming’ to help achieve some of its biggest goals like protecting natural resources and boosting trade.