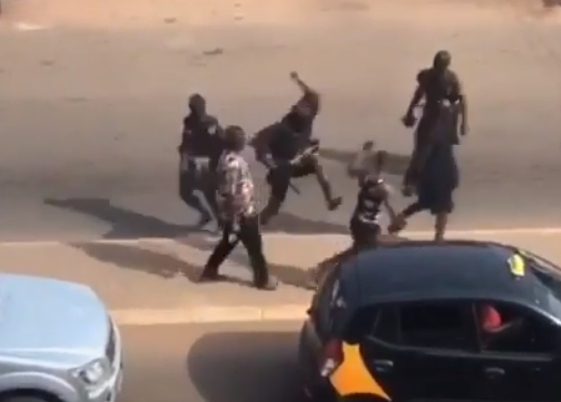 The Bono Regional Police Command has begun investigations into the alleged manhandling of residents in Sunyani during the ongoing Sunyani Omanhemaa funeral.

Earlier on Wednesday, reports from the area indicated that residents in the municipality were assaulted for not being clothed in red or black attire, to signify the mourning of a queen mother, Nana Yaa Nyamaa Poduo II.

In some viral videos circulating on social media, the executioners, locally referred to as ‘abrafuors’, as well as uniformed MTTU officers, were seen hitting residents who were not in the preferred attire.

But in a statement, the Regional Police Command mentioned that it has ordered an immediate inquiry into the matter.

Meanwhile, the Command says it has held a meeting with the representative of the Funeral Steering Committee about some excesses on the part of some Abrafuo and the need to uphold the rights of the individual.

It adds that the Committee has promised to take necessary action.

Meanwhile, the Sunyani Traditional Council has denied claims that the alleged assault was perpetrated by their executioners.

Kofi Adom Manu, representative if the Sunyanihene on Eyewitness News denied the social media video explaining that the act might have been carried out by some fake individuals who paraded themselves as ‘abrafuors’ from their palace.

“I do not think the video we have seen is factual. I know certain things went wrong but not what we see in the video. The fact is Omanhene and the Abrabour have been educated to how to maintain order. From the onset, there were fake ‘abrafuors’. So if there is anything, [it can’t be said that our ‘abrafours did it].”