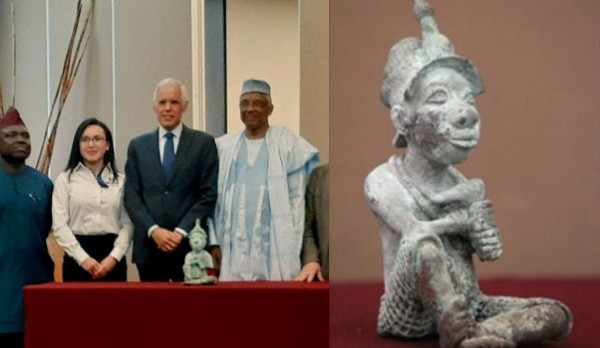 Mexico has returned an ancient bronze sculpture to Nigeria after thwarting an attempt to smuggle it into the country, officials say.

The artefact is from Nigeria’s south-western Ife city, famous for works depicting royalty and deities of the once-powerful Yoruba kingdom.

The sculpture is of a man sitting cross-legged, wearing a headdress and holding an object.

Customs officers seized it at the main airport in Mexico City.

“A beautiful bronze piece, and being of Nigerian heritage, it should return to its home,” said Diego Prieto, the head of Mexico’s National Institute of Anthropology and History.

The institute verified that the sculpture was of Yoruba origin, and it has been handed to Nigeria’s ambassador to Mexico, Aminu Iyaw.

Mexico’s foreign ministry said the artefact had been illegally exported.

“We oppose the illegal commercialization of archaeological pieces, an important cause of the impoverishment of the cultural heritage of the nations of origin since it undermines the integrity of cultures and, therefore, of humanity,” said Julián Ventura Valero, the deputy secretary of foreign affairs.

Officials did not give details about who was behind the attempt to smuggle the sculpture into Mexico, or its exact origins.

September 26, 2021
Today, we have a digital way of doing a lot of things. A lot of things that were previously analogue have moved into the...