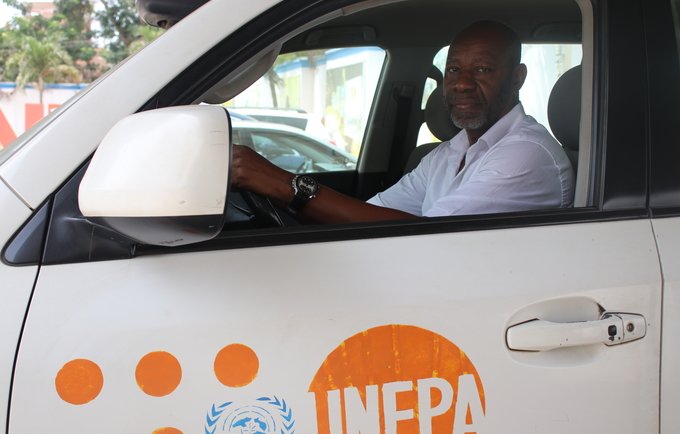 Born in 1959, he joined the agency in his early thirties. Unlike the complicated stories most people imagine to be behind ‘getting into the UN’, his recruitment process was rather simple. In 1990, Chief Mustapha saw a call for applications for a driver’s position at the UNFPA Ghana office in the Daily Graphic. He decided to seize the opportunity and send in an application.

Prior to this, Mustapha was an articulator truck driver who transported salt from Accra to Niger. His application was successful and he was called in for an interview, which comprised two stages: a test drive of a saloon car; then of a big truck. He came out as the best driver and so landed the job. Over the course of twenty-eight years, he has moved from a driver to a senior driver, and now the chief driver.

Today, he works together with his supervisor to oversee his fellow drivers. He enjoys his work, not only because he loves driving, but also because he believes that being a part of the UNFPA Ghana has “put him ahead in life”.

Chief Mustapha (as he is now affectionately called) hails from the Wa in the Upper West region of Ghana. He grew up in a polygamous family with several siblings, so managing finances was always a challenge. UNFPA Ghana opened his mind about the importance of family planning. He is better off financially with his small family size– one wife and three sons– all of whom are doing well.

Mustapha enjoys working with his colleagues, particularly during their planning meetings where they plan and discuss issues pertaining to their responsibilities. They consult with programme officers about agendas, the dispatching of letters and the facilitation of the daily operations of the CO.

He, however, struggles with the burden of the safety of his passengers. Mistakes in his job, unlike paperwork that can be re-done, have the potential to be dire or even fatal. As such, he finds comfort in the fact that the agency is dedicated to funding refresher courses for all drivers as a way of recognizing the importance of their work as well as the stakes involved.