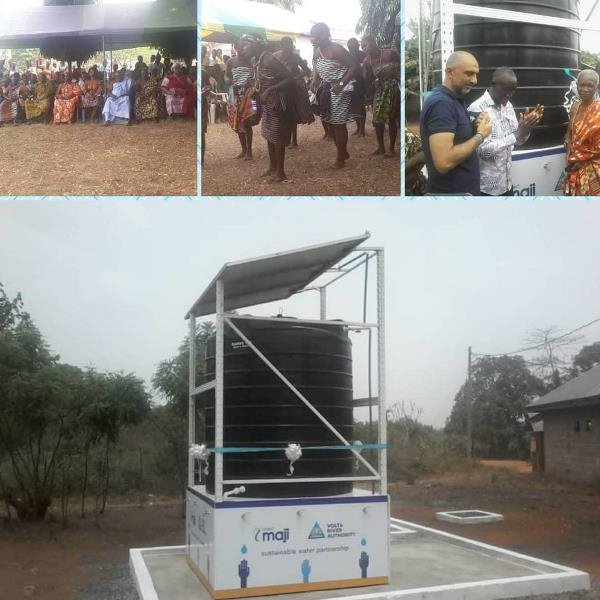 The Volta River Authority (VRA) has commissioned a solar-powered mechanized borehole for the people of Volo in the North Tongu District of the Volta Region as part of their social responsibility.

The facility, which cost 7,380 dollars, is expected to ease the burden on the people of Volo in their daily struggle to get water and rid them of the many hazards that come with drinking unsafe water.

In a speech before handing over the facility at Volo, the Deputy Chief Executive of VRA, Mr. Ebenezer Koramoa, said clean, accessible and safe drinking water was a fundamental human right crucial to improving the living standards of the people.

“This is why VRA believes that polluted water is not just dirty, but deadly. Therefore, going the extra mile to provide potable water for impacted communities is a key social responsibility requirement,” Mr Koramoa said.

The Deputy Chief Executive hinted that the goal of VRA was to discourage people from using untreated water from the Volta River as their main source of drinking water “because reliance on the untreated river water is one of the main causes of the bilharzia disease.”

He informed that the bilharzia average prevalence rate in Volo was 47.7 per cent which was a worrying development because it did not only call for urgent attention but also a determined effort by all stakeholders to improve the situation.

Volo is the fifth community to benefit from such a facility by VRA which was aimed at providing reliable and sustainable water supply to deprived and bilharzia-endemic communities along the Volta River.

The water facility comes with a 5000-liter capacity tank to store water for use when it is not pumping water at night.

It also has nine taps thus offering multiple access to the facility simultaneously.