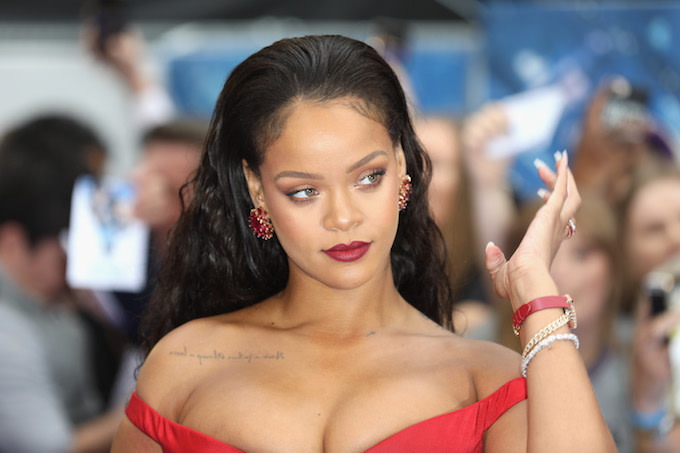 We are two months into 2020 and still no Rihanna album.

But since it’s the songstress’s birthday, we’ll kindly compartmentalize our frustrations and focus on everything she’s given us lately besides new music.

Since dropping her last studio album, “Anti,” in 2016, the 32-year-old businesswoman has been booked and busy. She’s started a makeup brand and lingerie line. She’s taken on several acting roles, from blockbuster movies to indie films. She’s gone luxury and gotten back to her roots.

And while we’re excited about everything the “Work” artist has been “work, work, work,” working on, we’d still really like that new album.

Until then, let’s take a look back and celebrate Riri’s serious accomplishments.

Rihanna, born Robyn Rihanna Fenty, shook the makeup industry when she launched Fenty Beauty in September 2017. The line featured an array of 40 foundation shades, setting a new standard for inclusivity that drew tremendous acclaim from customers happy to see so many skin tones represented.

The entertainer-entrepreneur’s makeup line brought in over $570 million in revenue less than a year and a half after it launched, according to Forbes, which estimated its value at more than $3 billion.

Aside from distracting her fans from her lack of music with lipsticks and highlighters, Rihanna also gave us an entire fashion line: Savage X Fenty (which perfectly defines her savage behaviour when it comes to releasing new music).

She launched her lingerie line in May 2018 to “celebrate fearless individuality” and broaden the definition of beautiful. And because Victoria’s Secret fashion show clearly needed another kick while it was down, Rihanna’s 2019 New York Fashion Week show delivered an impressive lineup of size inclusivity and diversity to the already struggling lingerie brand.

Rihanna goes to the movies

Understandable that Rihanna didn’t release any new music between launching a successful makeup brand for the people, by the people and filming for an all-female reboot of one of the most iconic franchises, who would have the time?

But then in December 2018, RiRi got everyone’s hopes up when she promised fans an album in 2019. Perfect, we at least had a time frame.

In April, she made an appearance at Coachella via Donald Glover’s set at the festival. She even starred in Glover’s hour-long tropical thriller, “Guava Island.” Spoiler: She didn’t sing in the movie.

In May, it was announced that Rihanna inked a groundbreaking deal with LVMH Moët Hennessy Louis Vuitton, the world’s largest luxury group, to debut a line called Fenty. It would make the 32-year-old Barbados native, the first black woman to run a major luxury fashion brand.

Later that year, Rihanna became the world’s richest female musician, accumulating a $600 million fortune, according to Forbes beating other famous women in music including Madonna with $570 million, Céline Dion with $450 million and Beyoncé with $400 million.

This month, the NAACP announced that the new-album-less RiRi would be receiving the President’s Award during the organization’s Image Awards on Feb. 22 for not only her “groundbreaking career as an artist and musician but (someone who) has also distinguished herself as a stellar public servant.”

2019 ended with no albums, singles or sonnets from Rihanna, but Sis did leave us with a bunch of foundation and contour sticks, underwear and two movies we can re-watch.

The good news: It’s clearly in the works, as Rihanna has been teasing us about its release for the past year or so and revealing her ninth studio album would be inspired by reggae.

“It’s not gonna be typical of what you know as reggae,” Rihanna told Vogue in an interview published in October. “Reggae always feels right to me. It’s in my blood. It doesn’t matter how far or long removed I am from that culture or the environment that I grew up in; it never leaves.”

Rihanna when she finally decides to give us new music: