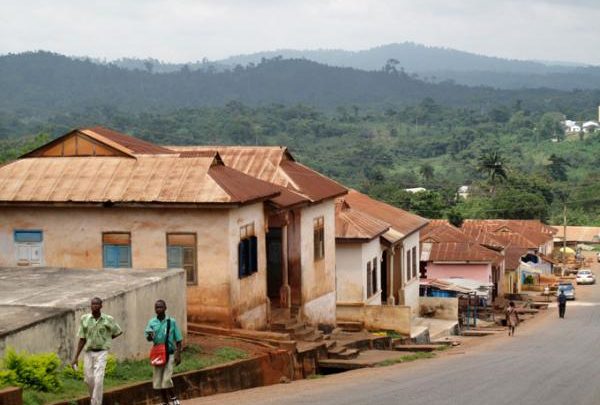 In the extreme north of the Western Region of Ghana are three traditional states collectively known as Sefwi.  Sefwi is made up of three mutually independent paramountcies of Anhwiaso, Bekwai, and Wiawso.

It is bounded on the northeast by Ashanti (Asante), on the east by Denkyira and Wassa-Amanfi, on the south by Awowin and on the west by the Anyi-Baule of the Ivory Coast. It also shares a common boundary with Brong-Ahafo In the north. All three states share a common dialect Sefwi but almost all the people speak Twi (Akan).

In addition, they have a common tutelar deity, Sobore, and a common annual yam festival — the Allelolle. Since the middle of the Seventeenth century, this vast stretch of territory has served as a centre of refuge for people escaping from the political centralization policies of their neighbours to the north and east. Refugees from Bono-Takyiman, Wenchi, Adanse, Denkyira, Assin and Asante found were welcomed in this territory.

It appears that the Awowin rulers who formerly controlled modern Sefwi territory adopted an open-door policy as a measure to increase the population of their state. Nor has the Influx of people into Sefwi ceased up to the present day. Its virgin forest serves as a bait for cocoa farmers and timber merchants from all over Ghana.

Between 1900 and 1902 the question of recasting the Gold Coast Colony-Ashanti boundary was raised but no significant alteration was effected. It had been argued that the geographical location of Kwahu and Sefwi made it “more convenient that they should be included for administrative purposes in Ashanti”. The possibility of establishing protectorates and separate administrations for the two areas had also been considered.

In 1901, however, the Governor indicated that he did not think “the Sefwis and Kwahus would understand or appreciate any difference being made in their status to that of the other tribes in the interior.’ As the Ashanti were to be treated as a conquered people and punished for rebelling, it was considered proper to exclude the Sefwi and Kwahu who had not participated in the uprising from that administration.

Besides, in Sefwi and Kwahu the laws of the Gold Coast Colony were, to some extent, successfully administered and the people were accustomed to taking their cases to the colonial courts. The 1895 boundary was therefore retained.

The inclusion of Kwahu and Sefwi in the Colony made it a compact territory. On February 18, 1896, Sefwi formally joined the Colony. The regional boundaries which became operative on 1st January 1902 survived until 1907 when they were recast.

ABOUT US
This is the official website for Ghana's no.1 campus portal & your guide to young people. We've got the best in the latest campus info, lifestyle, entertainment, shows, events, sports, news & more.
Contact us: [email protected].com, For Stories & Blogs: [email protected]
FOLLOW US
© 2022 © Kuulpeeps
Kuulpeeps - Ghana Campus News and Lifestyle Site by Students
This website uses cookies to improve your experience. We'll assume you're ok with this, but you can opt-out if you wish. Cookie settingsACCEPT
Privacy & Cookies Policy