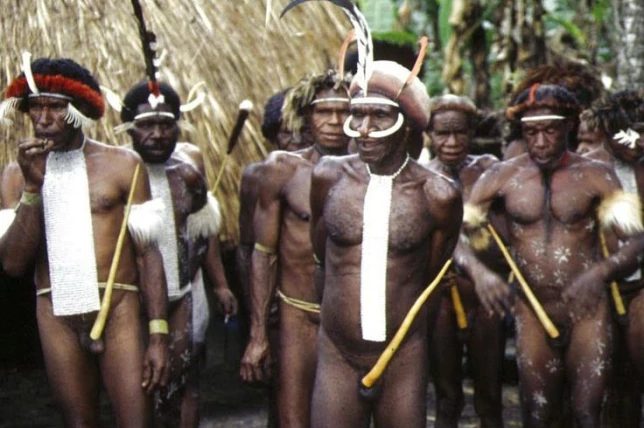 The Etoro tribe of South-Western Papua New Guinea has a tradition that has fascinated (and confused) many. They are the tribe that drinks semen to turn boys into men and we bring you everything you need to know about them.

This ritual, which is a symbol of a young boy’s rite of passage to manhood, starts when a boy is between the ages of 6 to 10 and comprises of 6 stages.

Imperative to the processes and teaching of the initial ceremony is the notion that women can be dangerous to men.

To become a man, and in essence a “warrior,” these young men are taught how to detach themselves from their mothers and the women around them as a means of showing that they can live without them and prove their masculinity.

In the first stages, a sharp stick of cane is inserted deeply into the young boy’s nostrils until he bleeds profusely. The young boys are also introduced to older warriors who are told that bachelors are going to “copulate” with them to make them grow.

While many of us might view the practice of inserting the cane stick into the nostrils as being ‘inhumane’, because of the obvious infliction of pain and injury to the body, for the Sambia it is a symbol of strength and his ability to sustain pain, which is a needed requirement of a warrior.

According to Sambia belief, the semen of a man possesses the ‘masculine spirit’, which young boys will be able to attain through his ingestion of semen.

Cultural differences play a huge part in how we react to such practices. What we may view as homosexuality may simply be a right of passage in another culture. The journey to ‘manhood’ has no set route but the end goal is always the same; to protect and provide.

Thousands Of Global Citizens In Accra Explore Culinary Cultures Of 20...

EchoHouse Ghana Takes Thousands Around The World On Day 1 Of...

Self-Care Tips That Everyone Needs During Their Christmas Break

Every Hilarious Thing We Learned About Relationships In 2021

4 Ways To Make Sure That Your December Pay Stretches Into...

A Short Guide On Surviving December Jams As An Introvert