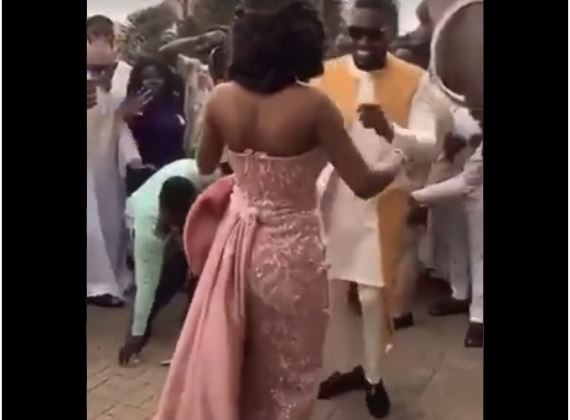 Yesterday, Osei Kwame Despite and his family shut down the entire country and the sheer amount of glitz and glamour displayed at his son’s traditional wedding ceremony.

Despite’s son Kennedy Osei was getting married to the love of his life Tracy who is a fashion illustrator.

The wedding had everything and it was worthy of a Hollywood power couple wedding ceremony.

There were vintage cars, there were sports cars then there were the luxurious 4x4s.

At such a wedding, it is normal for the couple to be sprayed with cash while they dance.

A gentleman wanted to take some of the money that Kennedy and Tracy were sprayed with from the floor, however, a handler quickly took the cash from him and dropped it on the floor.

Obviously, that person didn’t get the memo… Nobody in that circle picks money from the floor… nobody.