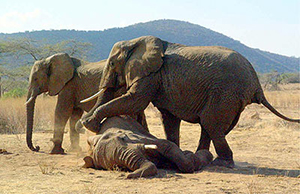 Botswana’s government has sold seven hunting licences – each of them allowing hunters to kill 10 elephants in designated areas and to take the trophies abroad.

Only companies registered in Botswana were allowed to bid for the licenses.

Officials will not reveal how much money they have raised and who the winning bidders were.

There is no scientific evidence to support the view of there being too many elephants. We know that Botswana’s elephant numbers haven’t actually increased over the last five years, we have a stable population. Elephants are critical to Botswana’s ecology.” -Ross Harvey (South African environmental economist)

But rural communities believe a return to commercial hunting will help keep the elephant population away from their villages, and also bring in much-needed income in places unsuited to high-end tourism.