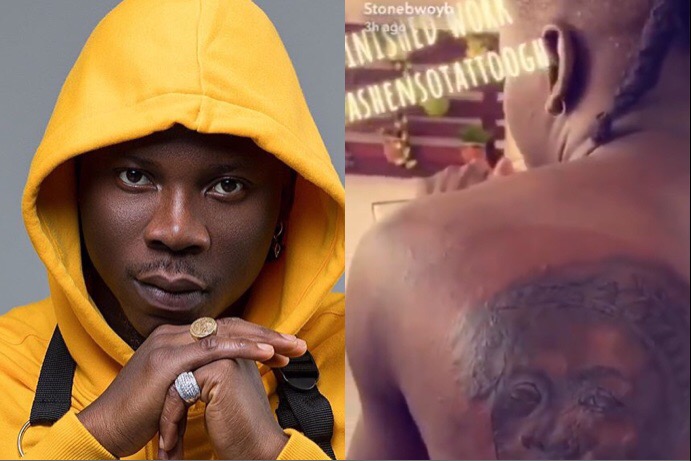 The CEO of Burniton Music Group, Stonebwoy, has stirred up emotions among many after he showed off an image of his late mother tattooed at his back for the first time.

In a post on his Snapchat, Stonebwoy shared an image of his mother tattooed at his back. Stonebwoy recently had a release of catharsis when he remembered his late mother while performing on stage at his annual end of year event, The Bhim Concert.

YEN.com.gh earlier reported that a flashback of his mother’s memories had Stonebwoy in heavy tears while performing at Tamale Sports Stadium on Saturday, December 21, 2019.

Stonebwoy’s mum, Catherine Satekla, passed away at the 37 Military Hospital in Accra on Wednesday, July 29, 2015, after she collapsed and was rushed to the hospital.

The president of Bhim Nation’s display of his mother’s face tattooed at his back is proof of his unmatched love for her.

Several reports claim that Stonebwoy has stated that he does not go anywhere without his mother’s protection and support.

Stonebwoy shared the image to celebrate 5 years of his mother’s demise.