Kuulpeeps – Ghana Campus News and Lifestyle Site by Students
Home News A Man Died In The Same Fire He Set To His Father’s...
Facebook
Twitter
WhatsApp 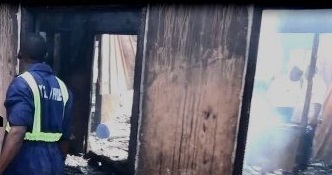 A 50-year-old man has been killed in a fire that ravaged a residential apartment at Achiase, in the Nwabiagya North District of the Ashanti Region.

The deceased, identified as Emmanuel Amega, believed to be mentally ill, allegedly set fire to the five-bedroom apartment of his 70-year-old father, Kwame Amega.

It follows persistent threats and two failed attempts to commit the alleged crime.

One person, a sister of the deceased managed to escape with some burns.

Amega’s charred body was found on a wooden bench in one of the rooms after fire service personnel managed to douse the fire.

The incident brings to two within a week, the number of persons killed in fire outbreaks in the Ashanti Region.

Fire Service personnel from Bremang responded to distress calls at about 11:40 p.m. on Sunday, to prevent the blaze from sweeping through other structures.

They, however, had to call for reinforcement from Komfo Anokye Teaching Hospital Fire Station, due to the intensity of the fire.

The deceased’s body has been deposited at KATH morgue.