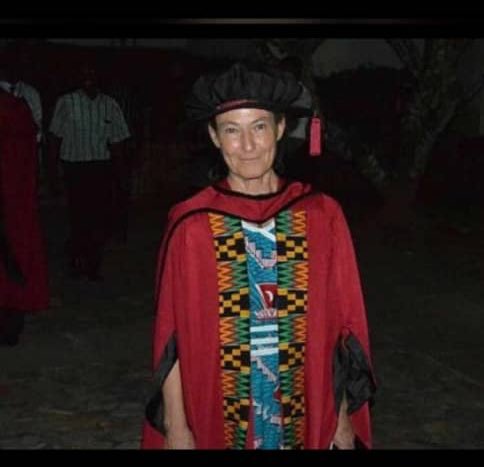 A former University of Ghana lecturer, Professor Margaret McIntyre has reportedly passed away.

She left the University of Ghana in 2017 after 20 years of dedicated service to the university and most especially, it’s Mathematics department.

Dr McIntyre arrived in Ghana in 1997 to teach Mathematics at the University of Ghana upon the advice of her late Ghanaian husband Professor Agbedazi, who she met in Australia during their PhD studies.

Although Dr McIntyre retired in 2015, she continues to teach till date. She brings her two (2) decades of dedicated and selfless service to Ghana to an end, at the end of 2016/2017 academic year, Gh Campus reports.

Dr McIntyre served as Head of Department of Mathematics from 2009 until she returned to Australia in 2017.

She has served the Mathematics Department in many ways. She served as departmental examination officer and in August 2009 she was appointed as the Head of the department.

In 2004, Dr McIntyre together with Dr Douglas Adu-Gyamfi began running MPhil programme in Mathematics at the University of which most of the graduates have gone ahead to study their PhDs and are currently lecturing at the department.

She was also instrumental in the reintroduction of PhD programme at the department which begun in 2018.

KNUST Dismisses One Student, Indefinitely Suspends Another And Rusticates Two Other Students

September 23, 2021
Whether you're a K-beauty lover, a clean-beauty fanatic, or someone in the beginner stages of makeup, you know you can always trust us to...