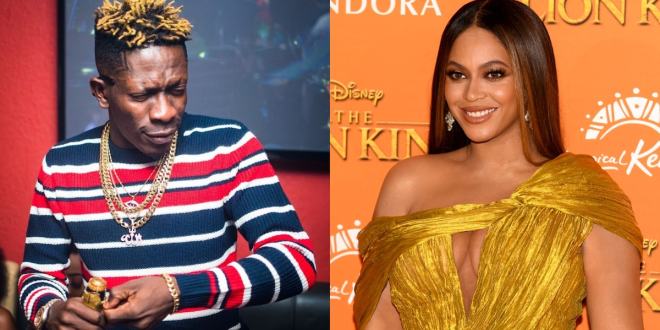 Lots of our favourite artistes won awards, some didn’t and one of those who didn’t was Shatta Wale.

Don’t act surprised just yet. No, Shatta Wale wasn’t there and nope, he was not directly nominated but we were all expectant cos he lowkey… stress on lowkey… got nominated for the 2020 Grammy’s just because he was on Beyonce’s Lion King album.

Beyonce’s album was nominated for Best Pop Vocal Album for The Lion King: The Gift and we were excited about it because a win for her would mean a win for Shatta Wale and all the other artistes who were featured on the album.

Well…Beyonce lost to Billie Eilish and Ghanaians think it’s okay to troll Shatta Wale just because his fans have been doing the most with his Beyonce collaboration and the hope that it would also come with a Grammy.

Twitter is going crazy and these are just some of the tweets laughing at him for thinking he could win.

Nothing can faze his fans tho…they still love him regardless and have high hopes for him.

Burna Boy’s African Giant album was also nominated for the World Music Album category and a win for Burna Boy would have meant a win for Manifest who was featured on Tomorrow, one of the songs on the album. Burna Boy, however, lost to Angelique Kidjo for her album, Celia.

The Recording Academy, responsible for the Grammy Awards always gives out customized participation certificates which recognize anyone who was creatively or professionally involved in a GRAMMY-winning or GRAMMY-nominated recording so…calm down y’all! Shatta Wale will get something.