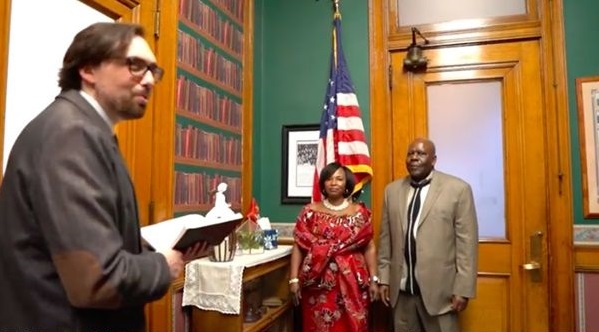 Kumawood actress Rose Mensah, popularly known as Kyeiwaa surely has a lot to be happy for, years after her previous marriage to Kumasi-based spare parts dealer, Daniel Osei ended just after four days.

The actress, 57,  got married to Micheal Kissi Asare in a court wedding in Massachusetts,  United States of America, where she has been residing in the last few years.

The ceremony was a very simple one that had only a few close friends and family in attendance. In 2015, Kyeiwaa returned her ring and drinks after she discovered that Osei was already married to another woman. She was accompanied by her father and a number of Kumawood actors and actresses to end the marriage.

In an interview on Kasapa FM back in 2015, Kyeiwaa said she was aware Osei had a child with another woman but she didn’t know he was married to her and since she didn’t want to be a second wife, the right thing to do was to end the marriage.

Now, she finally gets her happily ever after with her new boo.

ABOUT US
This is the official website for Ghana's no.1 campus portal & your guide to young people. We've got the best in the latest campus info, lifestyle, entertainment, shows, events, sports, news & more.
Contact us: [email protected], For Stories & Blogs: [email protected]com
FOLLOW US
© 2022 © Kuulpeeps
Kuulpeeps - Ghana Campus News and Lifestyle Site by Students
This website uses cookies to improve your experience. We'll assume you're ok with this, but you can opt-out if you wish. Cookie settingsACCEPT
Privacy & Cookies Policy