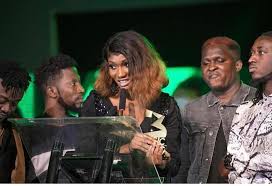 The CEO of 3Music Networks has revealed that the nominations list for the 2020 3Music Awards would be released on January 30.

Sadiq Abdulai Abu stated that the board had gone through thorough screening, search and debate to come up with the list of nominees.

He made this revelation at a press conference organised to announce the partnership between The Multimedia Group, 3Music as well as E and E concepts as official partners.

Mr Abu added that the main show would take place on March 28. However, ahead of the main awards show, 3Music Networks will host programmes including a Funfest and a women’s event on International Women’s Day.

The organisers, he stated, are working to ensure that some of the challenges the scheme faced in its previous years are avoided while leaving no stone unturned in providing value for money entertainment.

“The 2019 VGMA is a learning experience for us all, so we would factor in some of the things that we learnt from the previous event. Security would have a massive improvement and we’ve reached out to a number of security companies, private and state [owned] to enhance the system..”

He added that the Fantasy Dome, the venue for the 3Music is undergoing a facelift including the addition of extensions that would improve security.

“In terms of inviting guests and nominees, we’re taking some great measures to ensure that people who are not supposed to be there do not find themselves there. We are looking for a very quality VIP audience as much as possible,” he added.*

Sadiq Abdulai Abu added that this year’s theme ‘The Power of 3’ is to celebrate the scheme’s third year since it’s inception and also to mark the three things that have define 3Music thus far “the music, the fun and the social impact.”

September 23, 2021
Whether you're a K-beauty lover, a clean-beauty fanatic, or someone in the beginner stages of makeup, you know you can always trust us to...