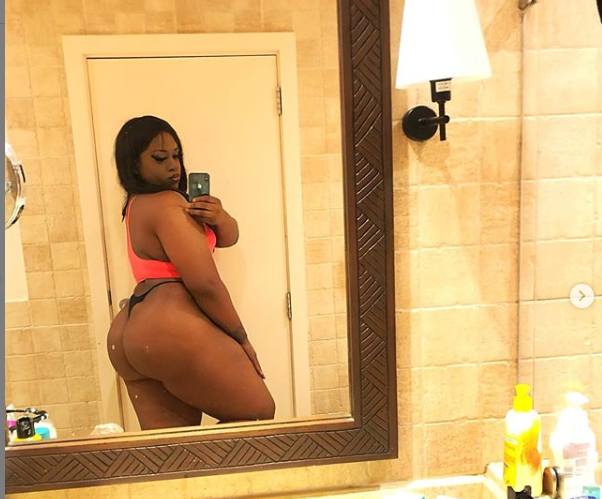 A lot of people trying to ask her out or for a one-night stand, makes her feel good. For those who enter her DM, most of them have no idea who she is. It’s all about the photos.

Martin Hughes realized who she was at the age of seven. At that young age, playing with the boys didn’t feel right. She knew within her she was a girl.

Society was not cruel at the beginning to Martin. However, Senior High School proved to be a difficult nut to crack.

“I caught myself in a role I didn’t want to play anymore at the age of 7. The vibe of the boys was annoying. I think it was toxic for me because I felt like a boy playing with girls.

“At the age of 7, makeup wasn’t a big deal. It was all about the girl talks, the barbies and the girl clothes. It was fun,” Martin Hughes told Pulse.com.gh.

She had experienced being herself as a girl by trying a few things from her mother who did not know at the time. By the time she enrolled to Mfantsipim School, she was already in her element.

“High School was the trouble. That was stress. The real hard life because I went to a boys school. I was in Mfantsipim School and it was stressful.

“It was a hypocritical system. You have boys telling you stuff, proposing to you and all but in the eye of the public, they will be judging you.

“I didn’t see it as a problem because you’re in the closet. I know you’re hiding and that’s your problem,” the 20-year-old talked about life in Mfantsipim School.

The experience in Cape Coast was not devoid of the troubles that come with being transgender in Ghana. For many teachers, Martin Hughes was the black sheep, the prime scapegoat when it came to trouble. She had already been tagged and it affected her truth.

Recalling one of her experiences, Martin narrates how someone touched her one night at school but changed and falsified the story in the morning. The usual stereotype had Martin judged before validation until an eyewitness came to her aid.

Martin-Hughes had her fair share of suspensions in school but was never dismissed. She embraced freedom, and did makeup whiles in a boys’ school, and since warnings by school officials to stop fell on deaf ears, she ended up with 4 suspensions during her stay at Mfantsipim.

“False reports were being sent to the authorities about me being with someone. They couldn’t dismiss me because it was reports without evidence,” the 20-year-old said.

By this time, Martin’s mother had come to know and was as supportive as possible.

“I have like the best mom in the world. She’s very supportive. I even have a tattoo in her name. I have 3 tattoos.

“My mom believes in freedom, but not abuse of freedom so sometimes, she really puts me in my place when I’m going wrong about myself and decisions. I always listen to her, she’s the only one who can tell me what to do,” Martin talks about her mother.

Martin says she doesn’t feel like a girl, but rather, she is a girl. For the average person who sees her photos, a girl is what her photos show. Despite having not gone under the knife, the 20-year-old has breasts and butt people envy according to comments on her social media pages.

“I haven’t touched my butt. I think I got it from my mom. She really has a big butt,” she explained to Pulse.com.gh.

Her breasts also are natural and started developing when she was in junior high school according to her narration. Despite pretending not to like it at the time because of trolls, Ohemartin confirmed she loves her boobs.

On whether she has a penis or vagina, she just said “I have something” while confirming she hasn’t had sex yet, but would love to try something.

The story gets interesting when it comes to Martin Hughes’ social life. From what millennials call ‘dick pics’ to simples hi’s and people asking to take her out, her DMs are filled with messages.

Having been true to herself since childhood, Martin makes people know right from the start who they’re dealing with. According to her, some leave, some stay and others become friends after knowing she’s trans.

Whether she intentionally posts photos to attract people on her social media pages, Martin said she does not. She said she does what she feels like at any given time.

“I’m not always doing something sexy or sexual. No! But once in a while when I feel like it, then I just do it,” she explained.

Martin goes to church and she believes in God.

“I love God and I am very prayerful. God does not look at the outer package to determine this one does not deserve this blessing. It is always about the inner person and the inner side of you,” Martin Hughes said to Pulse.com.gh.

“I pray a lot. I love God. I know he knows I love Him. Society is always going to be like what you’re doing is not Christ-worthy and that are you sure you love God? It’s about being a good person and your heart is the most important part of everything.“

Being transgender in Ghana: The story of Ohemartin

“When it comes to gender and sexuality, people bring in God and religion. But sin is not weighted on a scale and hell is not in layers. You judging me in the first place will land you in hell.

The hypocritical nature of Ghanaians is something Martin Hughes has come to deal with.

“You have to be yourself regardless of where you find yourself on the gender spectrum. The love will come, the hate will come, but you really have to focus on the love. People are people so you have to love yourself.” Martin Hughes ended the conversation saying.

Jay Cliff Just Dropped The Much Anticipated “Twelve2Five” Ep And We Are Loving It!!