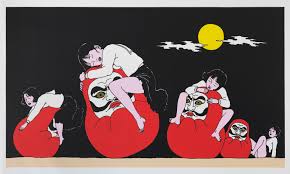 Japanese artist Toshio Saeki, also known as the “Godfather of Japanese Erotica,” has just passed away at the age of 74. The news arrived via Instagram by Nanzuka, his representative Tokyo-based gallery. So far, the exact cause of his death has yet to be confirmed.

Born in 1945, the artist spent his early years in Osaka, before moving to Tokyo in ‘69. Though he wasn’t always keen on speaking about his childhood, he did share that samurai-period dramas were something he enjoyed throughout his younger years, and sometimes he would also talk about his earlier illustrations, which were heavy with motifs like Shinto spirits, schoolgirls and corpses. In 1970, Saeki published Toshio SAEKI art book, which became such a success he was invited to host a solo exhibition in Paris. In ‘72, he created album cover art for John Lennon and Yoko Ono’s Some Time in New York City.

A good majority of his career was spent in the underground art scene, however, only gaining international attention in recent years. Currently, his work Ureshi Daruma, 2018 is being displayed at the Jeffrey Deitch gallery in New York in an exhibition titled “Tokyo Pop Underground,” a show that examines the evolution of contemporary Japanese art.