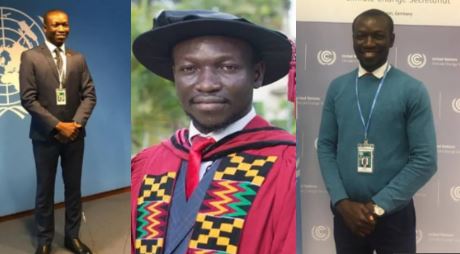 For many who are born in deprived areas of Ghana, becoming a PhD holder could be a tickle of one’s own fancy or a dream they may never wake up to live, but Justice Issah Surugu Musah, is proof that resilience triumphs hurdles.

The journey to the top of the educational ladder did not come on a silver platter for Justice Issah Surugu Musah, who bagged his doctorate degree in style.

He worked his way to the top by becoming a driver’s mate, a cobbler and a scrap dealer.

While pursuing his education, he was compelled to drop out of school to find money to pay his fees.

Dr Justice Issah Surugu Musah reveals he is the first person in his family to gain admission to the University.

From Widana in the Upper East Region, Justice Issah Surugu Musah is the third of ten children born to uneducated parents.

A young determined Musah continued at the Business School for his Master of Science in Sustainable Development degree.

In 2014, he gained admission to pursue a PhD from the same institution.

Before attaining these feats, Justice struggled at junior high school, performing abysmally in the Basic Education Certificate Examination in 1997.

Surprisingly, he was the best in his school. His first encounter with failure prior to moving to the next stage of his education did not stop him, gaining admission to the Tempane Senior High School.

However, he faced another hurdle. Surugu Musah could not enrol because his parents could not afford his fees.

In 199, he moved from his hometown to repeat the then Junior Secondary School, improved his performance in the 2000 Basic Education Certificate Examination and subsequently gained admission to the Ejisuman Senior High School but missed out on the opportunity because his parents once again could not afford to pay.

While a teenager, Musah was compelled to work as a cobbler at Cinkase at a popular border city in Togo where he was able to raise enough money to start High School at the Bawku Senior High School in 2001.

He passed his Senior Secondary School Certificate Examination but couldn’t pursue his tertiary education because of financial setbacks.

Forced to move to Ejisu owing to financial challenges, Musah moved to stay with a brother, who at the time drove an articulated truck.

Between, 2004-2007 he was compelled to work as a scrap dealer at the Suame Magazine, a trotro mate on the Ejisu-Kumasi-Kejetia route to raise money for his university education.

In 2016, he benefited from several research grants. In 2017, he was awarded an 18-month fellowship with the Frankfurt School of Finance and Management.

Few months before he graduated, he was awarded, multiple research fellowships.

Musah is a member of the American Society of Public Administration.

He believes education should be made free from nursery to the tertiary level.