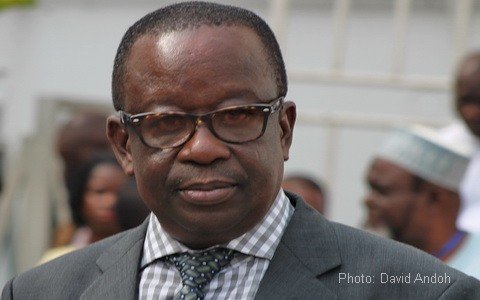 The National Security Minister, Albert Kan Dapaah is currently in the news after his video call conversation with an unidentified lady was leaked online.

The father of four, according to some, was holding the video call conversation with a side-chick.

Below is the little information we could gather about the National Security Minister who is now in the news for all the wrong reasons:

Albert Kan-Dapaah who was born on 14 March 1953 is a chartered accountant, politician, member of parliament and a current minister of state in Ghana. He is currently the Minister of National Security and the Member of Parliament for Afigya-Sekyere West constituency in the Ashanti Region. He was appointed by President Akuffo-Addo on 10th January 2017.

He is an Ashanti and hails from Maase-Boaman in the Ashanti Region of Ghana. Albert Kan-Dapaah had his secondary education at Acherensua Secondary School from 1964 to 1969. He then studied Accountancy at the Institute of Professional Studies (IPS), Legon. He had further Accountancy courses at the North East London Polytechnic, London and the Emile Woolf College of Accountancy.

Kan-Dapaah worked with Pannel Kerr Forster, a chartered accounting firm as an Audit Senior. He worked in their offices in Monrovia, Liberia and London, UK between 1978 and 1986. Back in Ghana, he was the head of Audit at the Social Security and National Insurance Trust (SSNIT) from January 1987. In September 1987, he joined the Electricity Corporation of Ghana where he rose from Director of Audit to become Director for Finance, a position he held for six years.

Kan-Dapaah was a partner in Kwesie, Kan-Dapaah and Baah Co., a firm of Chartered Accountants in Accra. He was also managing Consultant of Kan-Dapaah and Associates, a utility consultancy support group. He has also lectured Auditing part-time at the School of Business Administration, University of Ghana and the IPS.

1996 – President of the Institute of Chartered Accountants, Ghana