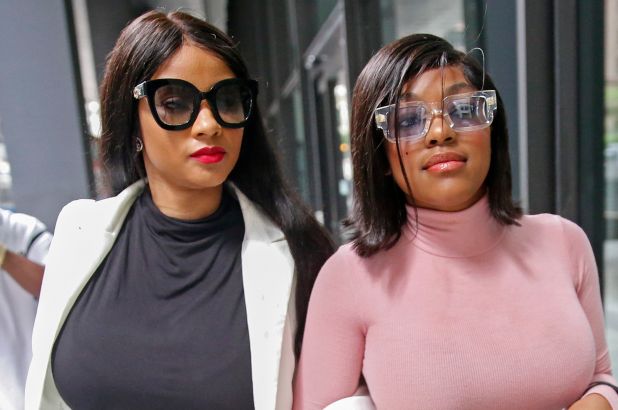 Chicago authorities were reportedly called to R. Kelly’s condo on Wednesday, following an altercation between his girlfriends on the singer’s 53rd birthday.

As pointed out by TMZ, the incident was captured on Azriel Clary’s Instagram Live broadcast as she was apparently collecting her belongings at Kelly’s Trump Tower residence. At some point during her stop, Clary began arguing with Kelly’s other girlfriend, Joycelyn Savage—and it didn’t take long before things escalated to physical violence.

The footage, obtained by TMZ, shows Savage screaming at Clary, accusing her of disrespecting Kelly’s house. Clary insists she is doing nothing wrong and is simply protecting herself, though the context of the argument is unclear. Moments later, we see Savage approach Clary and the two begin to fight. Only a few seconds of the scuffle was captured on camera, as it fell immediately to the floor; however, you can hear the two continue to fight as others attempt to de-escalate the situation.

Clary can be heard accusing Savage of sleeping with her when she was still a minor and threatened to report her to police.

Shortly after the incident, Clary returned to Instagram Live to broadcast her conversation with Chicago police. She claimed the incident began when Savage had allowed a woman identified as “Kimberly” into Kelly’s apartment. Clary told authorities she had known Kimberly as Kelly’s “handler,” but was uncomfortable that Savage had given the woman a key to their home. Clary doesn’t explain how the situation escalated, but said Savage eventually confronted her.

“[Savage] started saying I’m so wrong, and this and that. And I told her, ‘Joycelyn, you’re going to jail. You slept with a minor, and that minor is me. You did it multiple times over and over again,'” Clary told police. “She was like, ‘Oh, I can’t believe you’re doing this, I can’t believe you’re saying this,’ all this stuff. And then she started attacking me.”

Clary is then seen telling police that Savage had hit on her face and wanted to press charges. Though she initially declined medical treatment, TMZ reports Clary was taken to the hospital Wednesday afternoon.

Kelly’s attorney, Steve Greenberg, released a statement to TMZ, addressing Clary’s allegations of underage sex. Though he doesn’t specifically mention the claims against Savage, Greenberg says Clary had already provided a written statement in which she denied ever having sex with Kelly while she was a minor.

“I have a statement written by Azriel that she provided to me, voluntarily, after Robert was already in jail, that said she never had sex with him when she was under aged,” he said. “As far as this little cat fight, it is clear that it was staged to try and boost social media popularity.”

Earlier this week, Clary shared a number of tweets that suggest she may be ready to turn on Kelly, who is currently behind bars for a slew of alleged sex crimes.