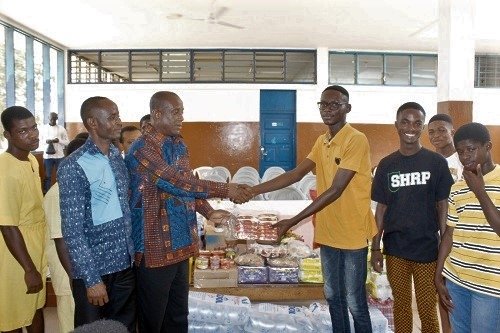 Some final year students of the Mfantsipim School in Cape Coast have donated assorted items to the Dzorwulu Special School in Accra.

The donation was done by the General Arts One class, with the support of the Director-General of the Securities and Exchange Commission and General Overseer of the New Creation Chapel International, Reverend Daniel Ogbarmey Tetteh.

The items, which comprised food and toiletries, were to support the smooth running of the school and the upkeep of the children at the facility.

Handing over the items on behalf of the group, a representative of the final year students, Mr Collins Fiifi Annowi, said the donation was to bring joy to the children during the festive season.

“We want the children of this special school to take part in this festive celebration and know that people care about their upkeep,” he said.

Another student, Mr Daniel Ogbarmey Tetteh Jnr, said they were elated to be part of such a worthy cause.

The Deputy Head of the special school, Mr Frederick Tetteh, expressed gratitude to the Mfantsipim students for the kind gesture as she received the items on behalf of his school.

“Considering what the final year students have done today, it goes to say that these young men are considerate of persons with disability in the society,” he said.

Mr Tetteh appealed to churches, non-governmental organisations and philanthropists to come to the aid of the school, stressing that “the government has a lot of responsibilities and cannot do it all”.

Mr Annowi also urged students from other senior high schools to make an effort to donate to such special schools in the coming year.

“I would like to urge other students in other schools to make an effort to support those in need,” he said.