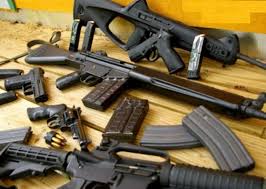 The Central Regional Police Command has arrested five suspects for allegedly engaging in the manufacturing of firearms.

The five are Pele Aziaku, 50, and Washington Kpovi, 40, both blacksmiths, and three minors aged between 16 and 17.

Briefing media personnel in Cape Coast on Friday, the Central Regional Police Commander, COP Paul Manly Awini stated that the three were arrested upon intelligence following strategies mounted by the police command to curb crime and enhance security in the region.

COP Awini said the suspects were rounded up in a special police operation undertaken between 2:40 am and 5 am Friday at three different locations in the Assin Foso municipality.

The police retrieved one locally manufactured pistol, six long-barreled guns, a piece of equipment adapted for manufacturing guns locally, the butt of a weapon, assault knives and a number of scissors.

COP Awini said at one of the locations where one of the suspects was arrested, they also retrieved a white substance suspected to be cocaine, scissors and four assault knives.

He gave the assurance that the police in the region would work hard to combat crime.

Touching on the robbery case that occurred on the Cape Coast-Accra highway on Thursday, COP Awini stated that the police had mounted a search for the robbers.

He stated that the police received a distress call around 6:30 pm that robbers were robbing passengers on a section of the highway and dispatched a team from different locations to the spot but the robbers fled before the police could arrive at the scene.

He said six vehicles were attacked and robbed during the robbery.

He observed that the command had reviewed its tactics after a careful assessment of the robbery and police response to ensure such incidents do not occur again.