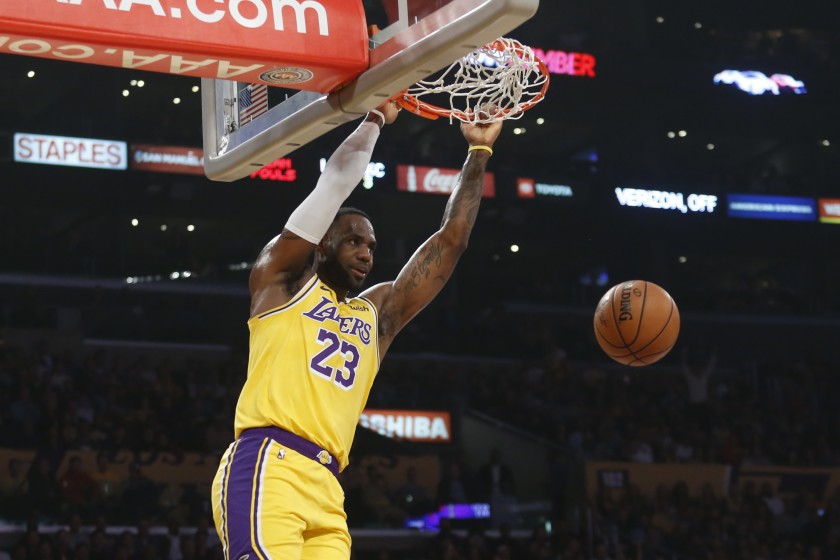 LeBron James became the first player in NBA history to score a triple-double against every team in the league as his LA Lakers side beat the Oklahoma City Thunder 112-107.

James registered 25 points, 11 rebounds and 10 assists in the win, for his 86th career triple-double.

“I really don’t know what to think about it, to be honest,” said 34-year-old James.

“But it’s a pretty cool stat and I’m glad it happened.”

The victory kept the Lakers top of the Western Conference with 12 wins and two losses.

“My team-mates have made shots for me throughout my career; coaches have put me in a position to be successful,” added James.

“Hopefully in all those triple-doubles I’ve got a winning record because that’s what’s most important.”

Russell Westbrook, of the Houston Rockets, is close behind James with triple-doubles against 29 of the league’s 30 teams.

Meanwhile, an injury-hit Golden State Warriors, beaten to the NBA title by Toronto Raptors last season, ended a run of seven defeats with a 114-95 win over the Memphis Grizzlies.

Nii Okai Tetteh - January 21, 2020
0
Ghanaian agritech startup Okuafo Foundation has been awarded $600 000 after it won the food category in the Zayed Sustainability Prize 2020.