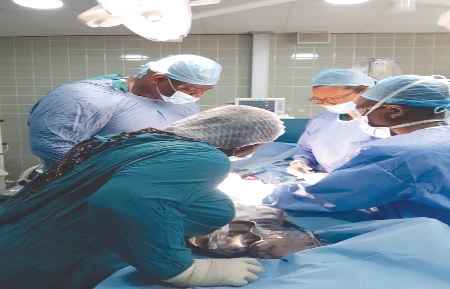 Doctors at the Korle Bu Teaching Hospital in Accra have operated on and repaired an enlargement of the biggest blood vessel in the heart (abdominal aortic aneurysm repair).

The team of doctors, led by the Head of the Department of Surgery, Dr Lily Pincho Wu, used the passage of a catheter (endovascular mode of surgery), a minimally invasive approach or pinhole surgery, to treat a 79-year-old patient, a sharp departure from the method in which patients were cut open during surgery.

In this case, a small incision was made for the passage of a catheter through the skin and the procedure monitored with computers.

“This ensured there was no intubation, no general anaesthesia, with its known complications; there was no need for blood transfusion and the hospital stay was significantly shortened, with an overall procedure mortality rate of three per cent,” Dr Wu told the Daily Graphic in an interview.

She said another mode of treatment of such an ailment was the normal open surgery, that had a mortality rate of 10 per cent, “with high morbidity, which may include anything from bowel ischaemia, acute renal failure, erectile dysfunction to cardiac failure and pneumonia”.

With such a deadly diagnosis, Dr Wu said, the surgery was done while the patient was completely awake.

An abdominal aortic aneurysm is an enlarged area in the lower part of the major vessel that supplies blood to the body (aorta).

The aorta runs from the heart through the centre of the chest and abdomen, more than 50 per cent of its normal size. It cuts off blood supply to the intestines.

The vessel distributes blood and nutrients to the body and occupies pride of place in front of the vertebral bodies of the spine. When it enlarges, it can cause back and abdominal pain; and when it grows large enough, it may be felt as a pulsatile abdominal mass. Not solving the problem will lead to complications.

Only 15 per cent of patients reach the hospital, and of these, only five per cent make it onto the operating table. Of this five per cent, half will die.

Abdominal aorta aneurysm is common among people who attain 65 years and above and its causes include smoking, age above 65 years and hypertension, hardening of the arteries and build-up of fat and other substances on the lining of a blood vessel.

Dr Wu explained that if the enlargement of the vessel was less than 50 per cent or less than five centimetres or the patient had no symptoms, medical treatment was all that was needed.

“If it is more than 50 per cent enlarged, or the annual rate of enlargement is greater than one centimetre a year or the patient has symptoms, it should be treated surgically.

This could be done openly or endovascularly (a minimally invasive approach or pinhole surgery),” she added.

The chief surgeon said the 79-year-old man had been a hypertensive patient for the past 10 years and was well controlled on medications.

“He had been having vague abdominal pains for some time. After many visits to different hospitals, he finally had a CT abdomen, when it was detected that it was ready to blow out,” she said.

Dr Wu also explained that the patient had only two four-centimetre incisions in the groin, with no blood transfusion.

Usually, in the evening before surgery, patients are restricted in what they eat and the time, but there was no such restriction with this process and the patient was allowed to eat a full diet.

Again, the patient, the surgeon added, was discharged after four days, explaining that if the surgery had been done through normal means, he would have been at the Intensive Care Unit for a minimum of 10 to 14 days to recover and would not be able to eat or drink.