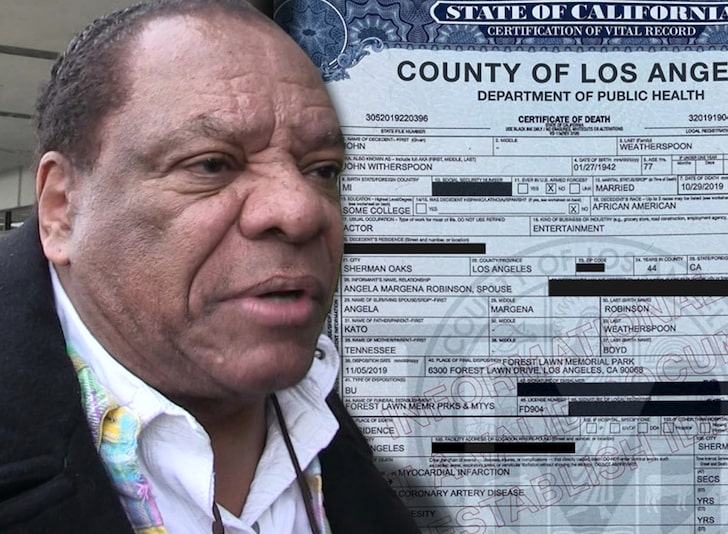 John Witherspoon was dealing with several heart-related ailments when he suffered his fatal heart attack … according to his death certificate.

TMZ obtained the document which says the beloved actor was battling coronary artery disease. It also says he had hypertension, although that’s not listed as a direct cause of the heart attack … but it certainly didn’t help his ability to survive it.

As we reported, John died Oct. 29 at his home in Sherman Oaks, CA. The death certificate lists his time of death as 5:30 PM.

TMZ obtained dispatch audio from John’s death … and you can hear the dispatcher request rescue for an unconscious man, saying he’s under cardiac arrest and CPR was in progress.

It wasn’t long before the dispatcher said the man had died and cancels the rescue.

His family announced the sudden passing saying, “It is with deep sadness we have to tweet this, but our husband & father John Witherspoon has passed away.”

The statement went on, “He was a Legend in the entertainment industry, and a father figure to all who watched him over the years. We love you ‘POPS’ always & forever.”

John, of course, was a legendary comic and actor who had tons of TV and movie credits to his name. Most notably … John played Willie Jones, father of Ice Cube’s character, Craig, in all of the “Friday” movies.” He was also simply Pops on “The Wayans Bros.”