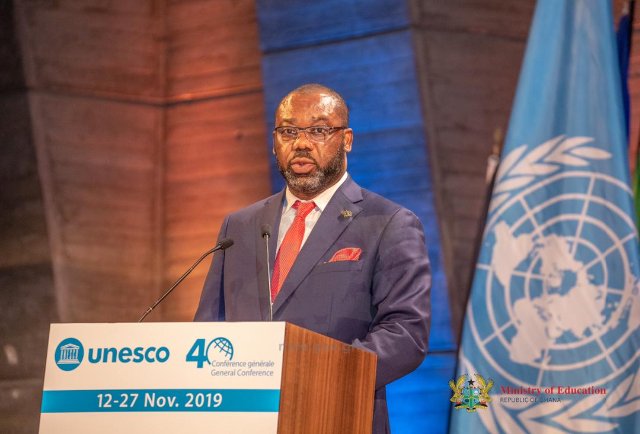 Ghana has been re-elected into the Executive Board of United Nations Educational, Scientific and Cultural Organisation (UNESCO). With this, Ghana rejoins the 58 members governing the board of the UN body for another four-year term.

Education Minister, Dr Matthew Opoku Prempeh, was elected unanimously at the 40th General Conference of UNESCO in Paris as Ghana’s representative on the board.

According to Dr Prempeh, Ghana’s re-election heralds an era of a renewed impetus in driving forward her commitment to SDGs through UNESCO’s work.

He called for the support of all the Ministries and Agencies that work within UNESCO’s field of competencies.

His alternate is Anna Bossman, Ghana’s Ambassador to France with concurrent accreditation to UNESCO.

The Executive Board acts in an advisory capacity to the United Nations and also exercises responsibility for the execution of the programme adopted by the General Conference.

This re-election reinforces Ghana’s role at the UN body.

UNESCO is a specialised agency of the United Nations (UN) based in Paris, France.

Its declared purpose is to contribute to promoting international collaboration in education, sciences, and culture in order to increase universal respect for justice, the rule of law, and human rights along with fundamental freedom proclaimed in the United Nations Charter.

The organisation which is the successor of the League of Nations’ International Committee on Intellectual Cooperation, has 193 member states and 11 associate members.

In January 2019, the Director-General of UNESCO visited Ghana and met with the President, Nana Addo Dankwa Akufo-Addo.

She took the opportunity to commend Ghana for its work at UNESCO and within the African region in furtherance of the aspirations of UNESCO, which are in the areas of Education, Natural and Human Science, Communication and Information as well as Culture.

Nii Okai Tetteh - July 16, 2020 0
The government of India in an attempt to make the country a destination for higher education for students across the globe has...