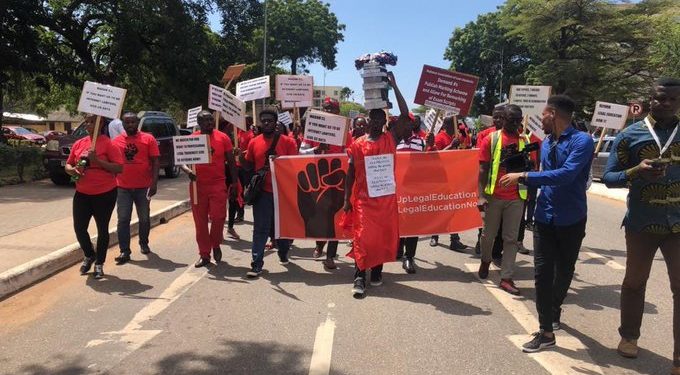 The regulator of legal education in Ghana has described a suit brought against it by aggrieved law students as lacking merit and has proceeded to ask the High Court to dismiss it.

The General Legal Council rejects the claim it violated the fundamental human rights of the students in disallowing a remark of their papers.

The applicants, LLB holders, sat for the entrance examination into the Ghana School of Law for the Professional Law Course in 2019.

They were, however, made to sign an undertaking not to challenge the results, a practice, the Legal Council says is conventional.

The students had asked the court to declare the undertaking not to challenge the results as arbitrary but the GLC denies this is the case.

The General Legal Council argues it takes all the scripts through a two-stage marking, signifying the sanctity of the published results.

Meanwhile, critics remain unconvinced with the position of the General Legal Council.

US-based Ghanaian lawyer and Professor, Kwaku Asare, who is a fierce critic of the Ghanaian Legal system has blamed the regulators for the consistent mass failures at the law school.

Critics have described the system as tyrannical.

But the regulators blame the students for the consistent mass failures at both entrance exams and the Bar exams.

The outgoing Chief Justice, Sophia Akuffo, who is the Chairperson of the Council, is on record to have said she would not superintend the mass production of lawyers.

Her critics, however, point out her position is warped, since mass production does not equal lowering standards.

A demonstration by Law Students Association to protest the mass failures ended abruptly when police descended on them, shooting rubber bullets and spraying them with water from their cannons.

The police received widespread backlash and their explanations received an outright rejection.

See Also: Law Students Disassociate Themselves From Artwork That Attacked The Chief Justice

Warning! These Cakes Will Give You Serious Trust Issues