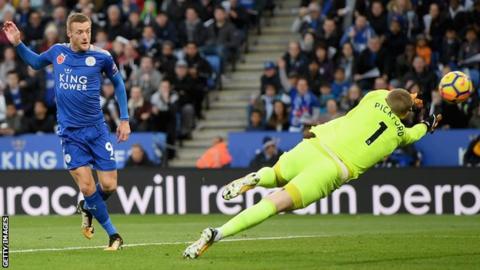 There is a game in the Premier League this Sunday between Leicester and Everton at the King Power stadium.

Leicester has won their last five matches at home, and six in a row overall.

Everton has won just three of their last 10 in the Premier League to sit 16th in the table.

There have been three or more goals in four of the last five matches at the King Power.

This bet has also landed in two of Everton’s last three matches on the road.

Vardy is two clear in the race for the Golden Boot with 12 goals in 13 matches this season.

He has scored seven goals in his last five league matches and has netted five in his last seven appearances against the Toffees.

Leicester have scored nine goals in this timeframe this season, more than any other Premier League side.

Everton has scored twice and conceded six in the same period.

Leicester is the Premier League’s most disciplined side, receiving just 12 yellows in 13 matches.

Everton is ranked in the top half for discipline, averaging just under two cards per match.